Santana makes the New York gang change their perspective; Finn helps reunite Emma with Will at a price; and Marley tells Jake about the kiss she shared with Ryder. 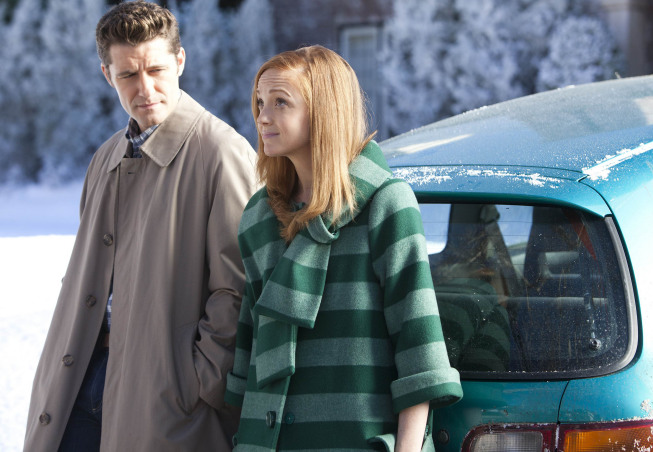 March brought spring showers and spring cleaning to the set of Glee this week. While some ended up in tears, others were cleaning up their act.

Will (Matthew Morrison) and Emma (Jayma Mays) were still up in the air last we saw, and in this episode, Finn (Cory Monteith) reunited them. Finn made sure to search high and low for her (out of guilt most likely) and fooled Emma’s parents into revealing her whereabouts. She had been cooped up in her sister’s home, and Will went in search of his runaway bride. After Will serenaded her from outside, she coyly met him to discuss where they stood. After she cited her reasons for running as not knowing who he was anymore (WHAT a load of bologna!), they agreed to start fresh with a movie date. Will returned to McKinley Glee Club practice to thank Finn for his help. Finn was happy with their reunion, but confessed to kissing Emma (that’s all he apologized for, so I guess he’s not in love with her). Will is stunned as he walked away in dismay over his best man’s betrayal.

Where did Glee leave off back in February? >>

While most viewers may have hoped for roommate harmony over in the Big Apple, Santana (Naya Rivera) had already worn out her welcome with Rachel (Lea Michele) and Kurt (Chris Colfer). The studio had evolved into a Full House set, as Brody (Dean Geyer) and Adam (Oliver Kieran-Jones) had also been referenced hanging around. But, during the snowstorm that had trapped everyone indoors, Brody remained the only one unaccounted for. Santana takes this time to confess her snooping tendencies which led to her discovery of Brody’s obscene amounts of cash and a pager. She believes this means he’s a drug dealer. Rachel won’t believe it even though it appears the others do, and Santana later corners Rachel into accepting she took a pregnancy test. While Rachel doesn’t actually verbalize the confirmation, it’s fair to assume her tears do it for her. Kurt isn’t singled out either, as Santana makes blatant references to Blaine (Darren Criss) in front of new beau Adam and implies the exes have unfinished business. Later, in a confrontation, Adam addressed the tension and Kurt mentions he wanted to truly move on from Blaine. Sounds like Santana is a harsh beacon of truth and a catalyst for action!

Guess which Glee star got a “best dressed” nod? >>

Ghosts of Marley’s past

Can’t have your cake and eat it too — especially if you’re bulimic (too soon? I digress). Marley (Melissa Benoist) last kissed Ryder (Blake Jenner), or vice versa. Valentine’s Day put her in a tough place, with her now having to figure out what she wants. During an intensely passionate song with Jake (Jacob Artist), she envisioned Ryder kissing her too. It gets too hot and she has an emotional outburst where she confessed everything to Jake. He walked out, but not nearly as broken-hearted as I thought he would be. Maybe he’ll run to take Kitty (Becca Tobin) up on the lustful offer she threw at him, meow. 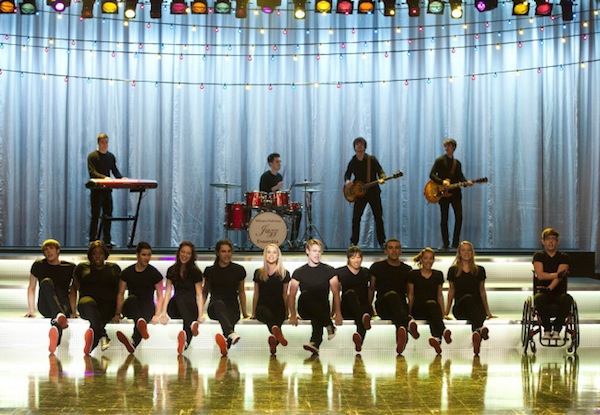 Only two songs this episode really put Glee on the musical map: “Come What May” from Moulin Rouge sung by Blaine and Kurt and “Unchained Melody” complete with a pottery scene from Ghost sung by Jake and Ryder. Both were flawless in their execution, to the point where I almost forgot the originals!

Glee may have some competition in the arena of high school musicals soon! >>

Glee — keep it up! Fans, what do you think we have in store next week?

Go get active! Proceeds from the download of Glee’s 500th song, “Shout,” will benefit Give A Note Foundation!