Justin Bieber isn’t having a very good time in London. The latest? He was reportedly rushed to the hospital after collapsing on stage. 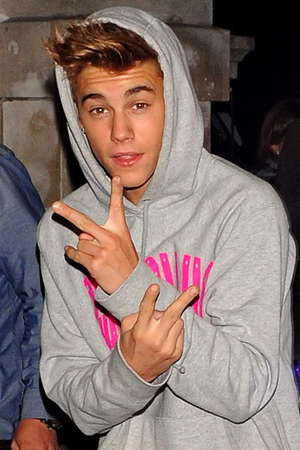 Justin Bieber’s no-good, very bad week continues: He was rushed to a London hospital Thursday night after he passed out on stage — but not before finishing his concert.

“He got oxygen from emergency personnel. He insisted on finishing the show. He is on the way to the hospital right now,” his rep told E! News.

After all, he probably doesn’t want his fans to boo him again.

According to sources, Bieber complained of being “very low of breath” throughout the show. Wonder if it has anything to do with the gas mask he sported on Wednesday night?

We hope the Biebs feels better soon — and that he takes some time off. It seems like all of the pressure of his tour and recent tabloid stories are starting to take their toll, even if he says otherwise.

“Rumors, rumors and more rumors,” Bieber posted Wednesday in a Twitter rant. “Nothing more nothing less. might talk about them 1 day. rt now im just gonna be positive. cant bring me down.”

“Im focused on the good things in life. im blessed and not forgetting it. im giving back every day for it. cant phase me,” he continued. “I understand it is part of the job to be judged… but judge me on the facts, judge me on the music, and be careful of the judgement u pass,” he said. “but know this… im only judged by one power, and i serve him.”

Growing up is rough, Justin — especially when you’re in the spotlight.