Tia Norfleet is a rising star and thought she could boost her career by calling herself the “first and only” female African-American driver. One problem? It’s not true. 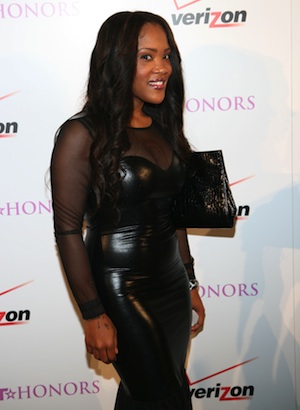 Tia Norfleet’s claim that she is the “first and only” female African-American NASCAR driver is impressive. It boasts of progressiveness on both racial and gender lines in a sport dominated by white males.

Yet Norfleet’s statement and attempts to draw publicity around her achievement are raising eyebrows from fact-checkers and NASCAR officials.

The New York Times ran a story Thursday that insinuated Norfleet lies about her “barrier-breaking” role in NASCAR as part of a “savvy marketing campaign strategy.”

Amber and Angela Cope push the envelope with NASCAR stereotypes >>

Viv Bernstein writes that not only does Norfleet exaggerate her racing qualifications in speaking engagements and interviews, but that her own website inaccurately labels her season schedule as NASCAR’s Nationwide Series — just one level below the top-tier Sprint Cup series. We’ve pulled a screenshot of Tia Norfleet’s website for you with the “one and only” still promoted even after the New York Times piece went live (see below).

Bernstein reports that Tia Norfleet is actually not licensed by NASCAR to compete within the Nationwide series and only completed one lap in a sanctioned NASCAR race, ever. Her claim that she is the “first and only” female African-American NASCAR driver is simply untrue since Norfleet isn’t actually racing in NASCAR-regulated competitions.

Instead, she’s racing at local tracks where licenses are simply purchased — and Tia Norfleet is purchasing licenses at “the lowest level of stock-car racing.” 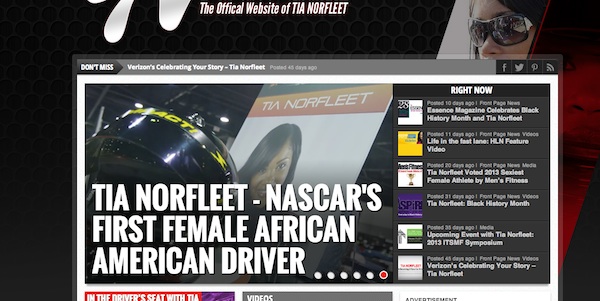 Moreover, since Norfleet has yet to rise up NASCAR’s competition levels, both the New York Times and NASCAR executives say it’s unethical for Norfleet to claim such a victory as “the first and only” African-American woman in NASCAR. Local track races aren’t watched by NASCAR so in reality there could be many African-American females racing at Norfleet’s same level. And there probably are.

“Ms. Norfleet is one of thousands of individuals who have purchased licenses in the Late Model Division of our sport,” said Marcus Jadotte, VP of Public Affairs and Multicultural Development for NASCAR. “I am uncomfortable with the attempts Ms. Norfleet and her representatives have made to forgo the sport’s development process.” Jadotte also stated, “I am uncomfortable with Tia representing herself in the way that she has.”

If Tia Norfleet really was “the first and only” female African-American driver, wouldn’t it make sense for NASCAR to support her accomplishment?

Meanwhile, Norfleet continues to use her dubious claim to attract media attention and sponsorships.