Emilia Clarke is poised to have a nude photo scandal on her hands. The Broadway debut of Breakfast at Tiffany’s, in which the Game of Thrones beauty briefly gets naked, had audience members breaking the theater’s strict no-photography rule! 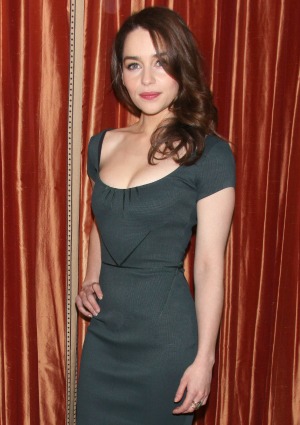 Emilia Clarke nude is a sight apparently not to be missed. When the young Game of Thrones star stripped down during a stage performance of Breakfast at Tiffany’s, many watching the performance took to rule-breaking and grabbed for their cameras!

“On Monday, it was a packed house including a huge contingent of fans of Game of Thrones,” the New York Post quotes an eye-witness source as saying while describing the atmosphere leading up to main character Holly Golightly’s strip-down.

“What titillated the audience was a full nude scene between Emilia and [male lead] Cory Michael Smith.”

So hot! The new Game of Thrones sneak peek >>

The bath scene in question takes place after Emilia Clarke’s character brings the poor writer Fred home to her apartment for a little TLC after he’s injured riding horses in Central Park.

“She undresses him and he gets in the tub,” a source said. “She then goes offstage and comes back in a towel. She takes it off and gets in with him.”

Despite the buzz surrounding the possibility of Emilia Clarke nude photos existing, they added, “So you don’t see everything. There are bubbles strategically placed.”

However, another audience member is quoted as saying with a smirk, “If you’re sitting in the balcony you can see a lot more.”

As a precaution, the theater is said to be stepping up security for the brunette beauty’s future performances.

Referring to the 25-year-old actress one person tweeted lustfully, “I would drink Emilia Clarke’s bath water,” though others sounded more skeptical of the entire incident. A second person tweeted Thursday, “Not sure if the Emilia Clarke story was planted to sell tix to Breakfast at Tiffanys or by HBO to remind ppl Game of Thrones is almost back.”

What do you make of Emilia Clarke’s nude photo drama?