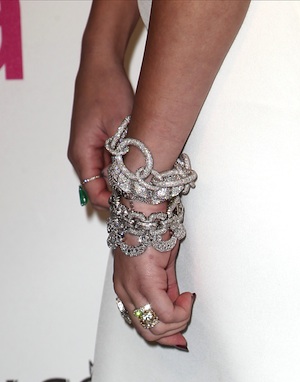 The wedding may be off between Miley Cyrus and Liam Hemsworth.

Miley Cyrus was spotted in Los Angeles without her massive engagement ring just weeks after photos were published all over the internet of Hemsworth flirting — and then leaving — with much older actress January Jones. Liam Hemsworth is 23 years old and Jones is 35 years old.

Has Liam Hemsworth been cheating on Miley Cyrus for months? >>

Miley ditched her engagement ring just hours after she went on Twitter proclaiming she and Hemsworth had not broken up and the wedding was still on as planned.

She tweeted, “I am so sick of La [sic]. And sick of the lies that come with it. I didn’t call of [sic] my wedding. Taking a break from social media. #draining.”

Miley Cyrus takes to Twitter to vent about relationship troubles >>

Sources say Liam and January seemed to be flirting inside the party. “It looked like they had some hot chemistry,” said an eyewitness for the tabloid magazine Star.

“Liam got January’s coat and helped her put it on, then they headed outside. They made to leave a few seconds apart, so they wouldn’t attract too much attention. Then they jumped into a waiting car and took off.”

Miley Cyrus marches on with wedding plans despite cheating rumors >>

Another insider said trouble has been brewing between Hemsworth and Cyrus for some time. “Miley is not the girl Liam fell in love with. She’s turned in[to] an embarrassment.”

We think that’s a harsh critique of Cyrus, and Star‘s reputation for sources is iffy at best. Though, we do think it’s odd Miley decided to pop out without her engagement ring.

Maybe she’s just messing with us?