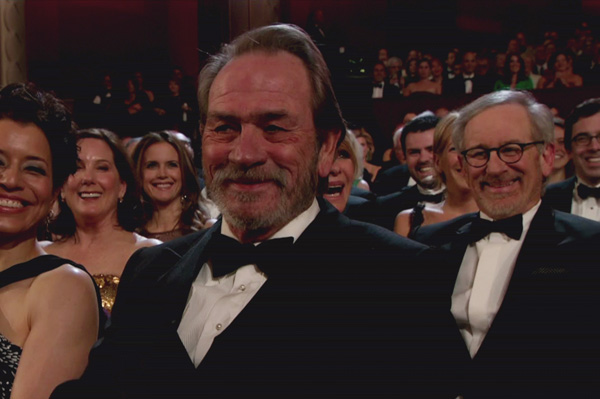 Tommy Lee Jones, the living embodiment of Grumpy Cat, was darned scary to have on set, says Matthew Fox, who stars as an Army officer who has a terrible choice to make in the forthcoming Emperor.

“The combination of Tommy’s persona, and what he’s done as an actor, combined with the fact that he’s playing MacArthur, one of our most iconic U.S. military figures, you could feel the energy on the set, people were on eggshells,” Fox told The Hollywood Reporter in a filmed interview.

Apparently, Fox and Jones hadn’t met, and Fox had been working on the film for eight weeks when TLJ showed up to film his part.

Can you imagine? Peaceful set, all of a sudden Jones shows up and everyone’s terrified he’s going to snap at them.

“I knew it was going to work for us because I think that’s probably the way that all the people who worked around MacArthur in 1945 felt,” Fox told The Hollywood Reporter.

Jones has been having a bit of a moment lately, what with the Grumpy Cat meme and Seth MacFarlane’s opening Oscar joke: “And the quest to make Tommy Lee Jones laugh starts now!”