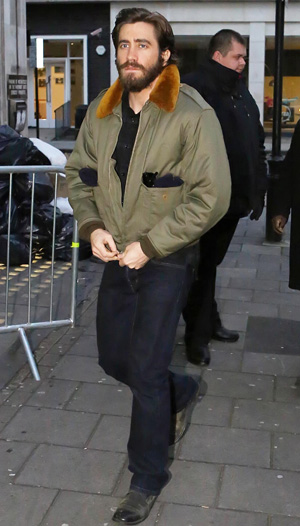 Whatever Jake Gyllenhaal’s got that makes the lovely ladies come running, he’s still got it: Us Weekly has it that the star is seeing Emily DiDonato, who modeled for Sports Illustrated’s 2013 swimsuit issue.

According to the magazine, a source says the 22-year-old model and 32-year-old Gyllenhaal met at NYC bike gym SoulCycle last fall and have been dating for “a month or two.”

The funniest part of the Us story: Gyllenhaal is said to be a real cut-up at SoulCycle: “He’ll hop on the instructor bike. He loves the attention from the girls!”

Gyllenhaal has famously cut a swath across Hollywood that’s John Mayerish in scope, including a relationship with Kirsten Dunst that ended in a broken engagement, a two-year affair with his Rendition co-star Reese Witherspoon and a months-long fling with Taylor Swift that was reportedly the topic of Swift’s “We Are Never Ever Getting Back Together.”

Gyllenhaal also dated Natalie Portman in 2006 and Rilo Kiley singer Jenny Lewis in 2001. She was also his date for the 2011 Golden Globes.