Demi Lovato has a half sister? Word the singer has another sibling is not only news to fans — she just recently found out herself! Thankfully, the 20-year-old’s first interaction with her secret sister went very well. 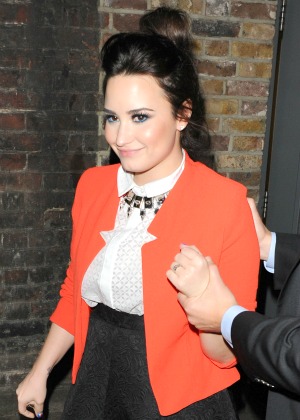 Demi Lovato dropped a personal-life bomb during a recent radio interview, revealing she has a secret half sister. The “Heart Attack” singer, who has been forthcoming with her personal troubles in the past, opened up about the older sibling she just discovered but pled the fifth on another subject.

“I just got to know I have an older sister I have never known in my whole life,” Demi Lovato shared while speaking with Long Island radio station WBLI. “She’s in her thirties. She’s my half sister, but I talked to her for the very first time in my life around when I turned 20.”

The smiling star, seen here in London last month, didn’t reveal exactly how she and the secret sister are related, but she did share a bit about their first interaction.

“I asked her, I said, ‘Why haven’t you ever contacted me?’ She said, ‘Well, I never wanted you to think I wanted anything from you. So I’ve just been kind of waiting to see if you wanted a relationship.’ I thought that was so incredible. So, I actually have three sisters!”

The half sister, who was not named, is Demi Lovato’s oldest sibling at 30, while Dallas Lovato is 25 and half sister Madison De La Garza is 11.

Despite revealing her secret sister to the radio show, the anti-bullying advocate refused to talk romance. When asked about her relationship status with 33-year-old actor Wilmer Valderrama, Demi Lovato stood her ground.

What do you think of why Demi Lovato’s secret half sister didn’t contact her?