We know The Newsroom isn’t about the topics covered but about the people covering them — but we still love watching the news unfold. 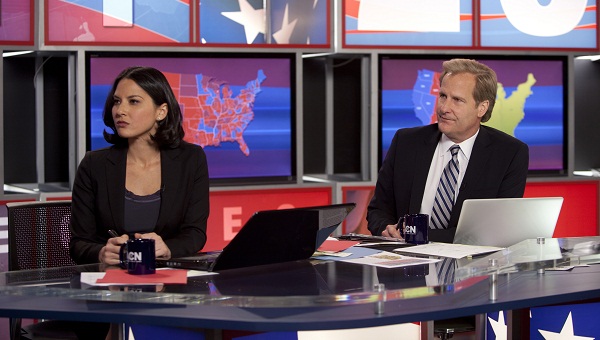 Over the weekend, SheKnows hit PaleyFest and earned the chance to ask the brilliant creator and writer Aaron Sorkin what’s ahead for The Newsroom. First, though, he was quick to remind us that the show isn’t about current events but about the team that covers them.

PaleyFest: The Newsroom‘s cast and crew tell us their favorite things about working with Aaron Sorkin >>

“I just want to emphasize that the show isn’t about the news but [about] the people who are making the news,” he said.

We agree — sort of. We’re all in love with Mack, Will, Neal and the gang. We rooted for Bigfoot no matter how crazy it seemed. We’re dying for Jim to get the girl. And Will! Sad, lovelorn Will… he should get the girl, too. While we love watching as the news unfolds before them and enjoy seeing how they choose to handle it, it’s more than just the people that captivate us — it’s the news, too.

Newsroom gears up for season 2: Who’s coming for a visit? >>

Things go wrong. People die. Countries fall. Oceans rise up with oil, and the plains become littered with dead birds. As we watch the news (on any station), though, those events are tossed in between celebrity marriages; anchors’ hurt feelings over red-carpet run-ins; and crazy, murderous mothers. When real issues manage to filter through and earn their spots and their sometimes over-coverage, we’re faced with another issue: We’re left wondering if we’ve really been given all the information.

We love the people of The Newsroom, but we also get tangled up in reliving our recent history and watching it unfold through different eyes while possibly catching new insights into those events. It’s about the people who tell those stories because they shape our opinions of them, and it’s fun to see how Will and Mack can — months later — reshape our opinions yet again.

The Newsroom to return in June! >>

So prepare to have your opinions poked, because here’s what Aaron Sorkin says we can expect from Season 2 of The Newsroom:

They’ll start with the fall of Tripoli, just about a week after Season 1 ended, and then go right up until just after the election. We also hear that while Sandy Hook won’t be covered this coming season, it’s not out of the realm of possibility for a future season. However, the people behind the show only want to cover it if they can do it justice and find a new perspective without diminishing the issue (or making it worse for the families involved).

The Newsroom‘s cast continues to grow >>

And what about those people who make and share the news? What can we expect from them?

Boo! Guess we’ll just have to watch and see!