Actress Ali Landry is joining the Hollywood baby boom. On Wednesday, she announced that she is expecting her third child. 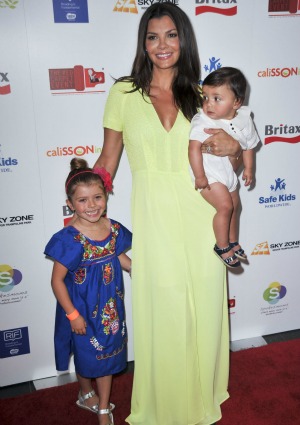 Hollywood is experiencing a big baby boom in 2013, and it’s time to add actress Ali Landry to that list. The mother of two is about to become a mother of three, her rep confirmed to People on Wednesday.

The 39-year-old and her husband, director Alejandro Monteverde, already have a busy household — daughter Estela Ines is age 5-1/2, and son Marcelo Alejandro is 17 months old.

Landry takes her role very seriously, not only at home but also in the public eye. She is the founder of Spokesmoms, which reviews child products for moms. She also works with the charitable organization SafeKids.org to help prevent childhood injuries.

The former Miss U.S.A. wrote about her life in a People blog, telling other moms, “My family gives me more joy than I thought possible, and my career fulfills me tremendously. All in all, I feel like I am in the exact place I am supposed to be in, doing exactly what I am supposed to be doing.”

The road to a happy personal life was not so easy, though. She was briefly married to Extra TV host Mario Lopez. Their marriage only lasted two weeks after the tabloids revealed that Lopez had an affair at his bachelor party. Lopez has since married Courtney Mazza, and they recently announced that they are expecting their second child.

Landry met her current husband at a theology class in LA. The couple share the same ideals about parenthood and relationships, so it is a match made in heaven. They have been married since 2006.

Congratulations to Ali Landry on her happy ending!