Miranda Lambert graces the small screen with dainty outfits and a dash of crazy in her latest music video. 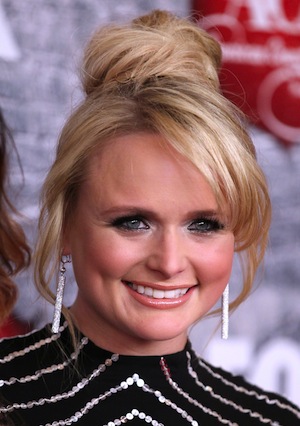 Miranda Lambert debuts “refined crazy” in her vivacious new video for “Mama’s Broken Heart.” It’s a charming, upbeat portrayal of a woman’s frustration, but it has its share of profound wisdom.

What is Miranda being nominated for now? >>

It delves deep into a woman’s plight of hiding from everyone else when she’s falling apart on the inside. It takes real work to keep it together and anyone can relate almost immediately when Miranda comically displays her aggression by stabbing the food on her plate.

It’s a vibrant video bursting with darling outfits and luxurious backdrops. It can’t be sheer irony that Miranda also looks a bit too pristine — almost plastic like our favorite Mattel doll. While the song touches on the importance of a woman’s appearance and her demeanor, it also expresses the restrictive sentiment that was once placed on women to hide showing their feelings.

Ms. Lambert teeters to each extreme — ranging from quietly stirring in a bathtub to cathartic physical aggression in her bedroom. Which way is right? Any! Her video is a symbol of all the different coping styles — some can let flashes of emotion out occasionally, while others need an atomic explosion to release their pain.

The tumultuous experience of recouping after a breakup is not easy, and Lambert’s video is a gentle reminder that we are not alone when we go through a rough one. Somewhere, someone else feels exactly what you do — rage! Thanks to this artist’s daring performance, you can know that outburst you had isn’t exactly abnormal.

A humorous thought did occur to me either Miranda is a great actress, or Blake Shelton must be scared out of his mind when he makes her mad!

Blake Shelton is in some hot water of his own right now, but it isn’t with his wife! >>

Check out her video below!

Need more? Check out our other editor’s video picks: