Actresses of a certain age complain there’s not enough work for them in Hollywood, but 52-year-old Jane Lynch seems to be doing just fine on the small screen, maybe because she keeps getting hired for a particular type of job. 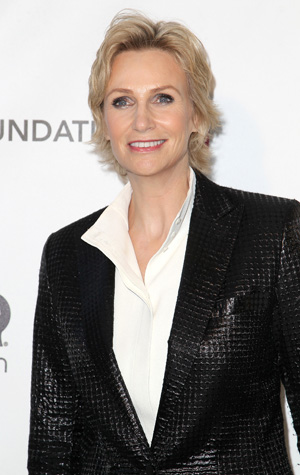 Jane Lynch is going to be in a new Fox comedy come fall. Or, to be more exact: Her voice is.

Lynch and That ’70s Show‘s Wilder Valderrama will be cartoon cops in Fox’s Murder Police, an animated sitcom set in a city precinct, Entertainment Weekly reports.

Created by David A. Goodman (Family Guy) and Jason Ruiz, Murder Police follows the goings-on of a nervous detective (Ruiz) and his bumbling colleagues.

Lynch will play Justice, a righteous working mom and crusading detective, while Valderrama will be Donel, undercover cop and rebel.

Fox has ordered 13 episodes of the show, Entertainment Weekly writes.

While holding down the role of iconic tracksuit-lover Sue Sylvester on Glee since 2009, Lynch has built herself quite an impressive voice-work resume.

She’s done work in popular kid’s cartoon series like Phineas and Ferb, where she’s an animal-loving mom, and on Hanny Manny, where she plays a park keeper. She’s been on The Simpsons. She’s been in The High Fructose Adventures of Annoying Orange.

And she’s been in movies, like 2011’s hit Rio, and most memorably, as a gung-ho video-game sergeant in 2012’s Oscar-nominated animated feature Wreck-It Ralph.

Are you excited to hear her as a bumbling cop, too?