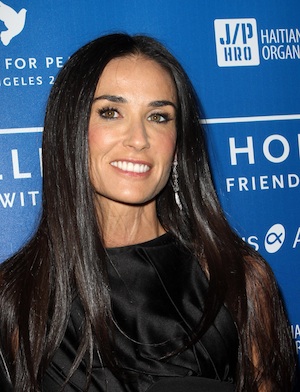 Once upon a time Demi Moore was the celebrity and Ashton Kutcher was the rising model/actor boy toy. Now, Kutcher is a celebrity in his own right and Moore says that’s because of her.

Demi Moore moves on with another young boyfriend >>

Given Kutcher’s A-list fame, Moore says she doesn’t owe him much and is exhausted from trying to negotiate a settlement. So today, Page Six says Moore is filing divorce papers: We’re going to trial, folks.

Says the newspaper’s source, “Ashton has been very difficult during the talks.” The source went on, “You could even say he has been hostile.” Page Six notes Kutcher is actually the highest-paid actor on television, raking in more than $24 million for Two and a Half Men. Is Kutcher just being greedy?

“After over a year of attempting to reach a settlement, Demi is definitely ready to move on,” said Page Six’s insider. “It’s hoped lawyers for both sides can reach a settlement this spring, otherwise the divorce will go into litigation and trial.”

Moore’s filing of divorce papers comes a few years after her split from Kutcher. There was much speculation Kutcher was unfaithful to Moore. The pair made headlines in 2005 when Moore married Kutcher, who is 16 years her junior.

No word yet from Ashton on Demi’s move to file.