The actress has confirmed she will be appearing in the next Star Wars film, and if she has her way, the bikini and bagel buns will be coming with her. 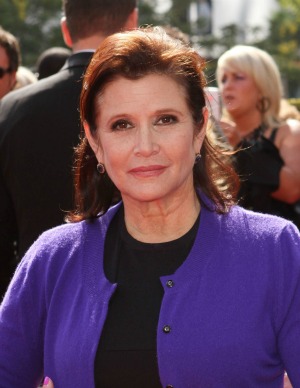 It’s official, Princess Leia is back. Carrie Fisher confirmed in a recent interview that she has signed on for the next Star Wars film, bikini and all.

Fisher gave a simple “yes” when asked if she would reprise her role by Palm Beach Illustrated magazine. But don’t expect her to be one of the main characters. It has, after all, been almost 40 years since the first film.

“She’s in an intergalactic old folks’ home,” she told the magazine of her wishes for the character. “I just think she would be just like she was before, only slower and less inclined to be up for the big battle.”

However, some things never change, and Fisher said the most important parts of her character could very well be making a return.

“The bagel buns and the bikini, because probably she has Sundowners Syndrome,” she said. “At sundown, she thinks that she’s 20-something. And she puts it on and gets institutionalized.”

Mark Hamill agrees on the character direction. Last month he talked to Entertainment Tonight about the possibilities of joining the cast for the new film.

“They’re talking to us,” Mark Hamill said, according to the Hollywood Reporter. “George [Lucas] wanted to know whether we’d be interested. He did say that if we didn’t want to do it, they wouldn’t cast another actor in our parts; they would write us out.”

The actor also has some ideas about what he’d like to see in the new film.

Can Carrie Fisher fit into her Princess Leia bikini now? >>

“I’m assuming, because I haven’t talked to the writers, that these movies would be about our offspring,” he said. “Like my character would be sort of in the Obi-Wan range [as] an influential character.”

Harrison Ford also has not confirmed his role in the film, but he did confirm he will be joining another film very soon.

As for Fisher, she’s just staying busy and not putting Star Wars at the forefront of her priorities. She said she’s working on writing another book as well as putting together a musical in her spare time.