Joan and Melissa like to work together, we guess? The pair shop a show about familial killers, not, we hope, sourced from real life. 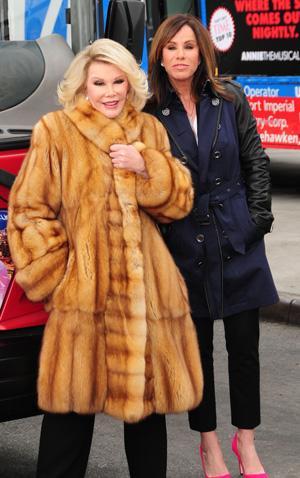 Joan and Melissa Rivers are taking meetings to pitch Mommy Deadest, a new show that would spotlight mother-and-daughter killers and victims, The New York Post reports.

The ever-popular “sources” all tell the Post that Joan and Melissa would host Mommy Deadest, and that the types of killers spotlighted would be deranged ladies like Lizzie Borden (acquitted of killing her brutally stabbed dad and stepmom in 1892) and Noura Jackson, the teenager who stabbed her mom Jennifer Jackson more than 50 times in 2005 in Memphis, Tennessee. She was sentenced to 20 years.

According to Page Six, Schleiff was so enthused by Joan’s pitch that he tasked his network’s developmental team with giving Mommy Deadest a whirl.

Joan and Melissa have worked together numerous times in the past, perhaps most notably on E!’s weekly fashion roundup Fashion Police, where Melissa proved somewhat milder in her criticism of celebrity style than Joan, who’s on record as saying that a set of metallic shoes worn by Gary Busey “match the metal plate in his head” and that “Rihanna could make a full body cast look sexy… and if she keeps dating Chris Brown, she might.”

Joan and Melissa are also working on the third season of their reality show Joan & Melissa: Joan Knows Best? in which Joan moves in with her daughter and grandchild.

Never even heard of the show? Yeah, it’s on the WE network, and a lot of people haven’t.