Kate Winslet graces the April issue of Harper’s Bazaar UK and explains how she picked up the pieces after her divorce from longtime husband, Sam Mendes, and found love with Ned Rocknroll. 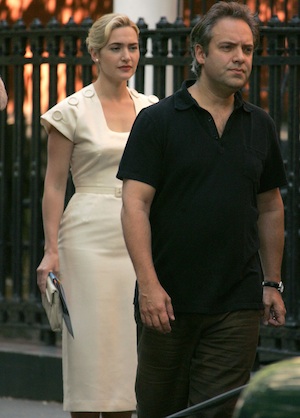 Kate Winslet graces the cover of the Harper’s Bazaar UK‘s April issue and the woman looks just as stunning as ever.

While some critics of the magazine and fans of Winslet say the Harper’s Bazaar cover is way too Photoshopped — Winslet is hardly recognizable on the cover and accompanying photo spread — the photos might just be a new look for the 37-year-old.

Winslet sat down with the magazine to talk about life since her Academy Award for The Reader (February 2009); a tumultuous few years in which she divorced longtime husband, director Sam Mendes, and then remarried Ned Rocknroll in December 2012. A successful career dotted with comments about her weight and figure along with the failure of two marriages has taught Winslet much about life and living.

“I think I can see more clearly now — about how the pattern of past experiences has shaped who I am, and the characters I have played — and I am grateful for that.” She continued, “I have so much more material to draw on for work — rubble, bricks, — and I know I can carry it now. I’m not going to drop it, and if I do, I’ll sift through it. Does that make any sense at all? Probably not…”

Winslet is obviously reflective about the pain the past few years of life has brought her, but she seems focused on channeling that energy into future roles and letting the rest fall to the wayside. Many thought Winslet’s marriage to director Sam Mendes was perfect — an ideal meshing of the creative and beautiful, total Hollywood glamour.

Winslet’s subsequent divorce from Mendes forced the public to stop idolizing her. Yes, she’s talented and gorgeous. But as her Harper’s Bazaar interview shows, Winslet has to deal with life’s ups and downs, too.