Julia’s career is on the line when she and Peter submit the new book of Bombshell for a read-through. 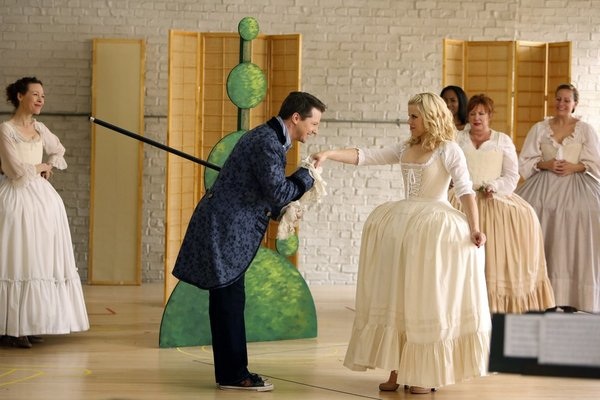 Here comes the truth. This is the moment we learn if Peter is a scam artist, if Julia’s book will finally be good enough, and if Bombshell with make it to Broadway. This is the read-through.

Peter (Daniel Sunjata) certainly does have a bad reputation and there’s something not entirely trustworthy about him. However, after spending the weekend together (only writing apparently) Julia (Debra Messing) was able to produce a book that even Derek (Jack Davenport) called “brilliant.” She went with her instincts, trusted Peter’s opinion, and came out with a multilayered musical success.

Even though Jerry knew how amazing the piece was, he said he didn’t think it was enough of a spectacle to fill seats on Broadway for years to come. But Tom had sent him the original Bombshell script a week earlier and that’s the story he wants to produce. Unfortunately, Tom sides with Jerry on this one.

Behind the scenes of NBC’s hit show Smash >>

With Derek on Julia’s side, Jerry decides to go to Eileen to have her choose which version will be made. She’s about to pick when the episode goes black and we have to wait until next week!

Meanwhile, Ivy is losing her patience when a comedy star joins the cast of her new play. Terry, played by Will and Grace star Sean Hayes, ruins the tragedy by trying to turn it into a broad comedy. It’s terrible. However, he finds inspiration in Ivy’s moving performance and decides the only way he can truly act is if he goes off his meds. That always sounds like a bad idea. This is going to be fun to watch play out.

Will and Grace stars reunite on Smash >>

In other news, the Karen (Katharine McPhee) and Jimmy romance has hit a snag because Kyle says she’s dating Derek. Now, instead of straight up asking Karen if it’s true Jimmy gives her an awkward “let’s be friends” speech because now he knows about her “situation.” Neither of them actually seem happy about this, but when it comes to matters of the heart people rarely speak up.

Also, Kyle had a read-through of his own and apparently he’s an epic failure of a writer. The dialogue was so terrible that the group suggested they remove all dialogue and just use Jimmy’s songs, like Rent. Kyle goes along with it and it will probably be brilliant because Jimmy is amazingly talented. But how important will Kyle be to the play now?