Spencer is on emotionally shaky ground in Radley, Toby may or may not be dead and an unexpected character shows up… alive. 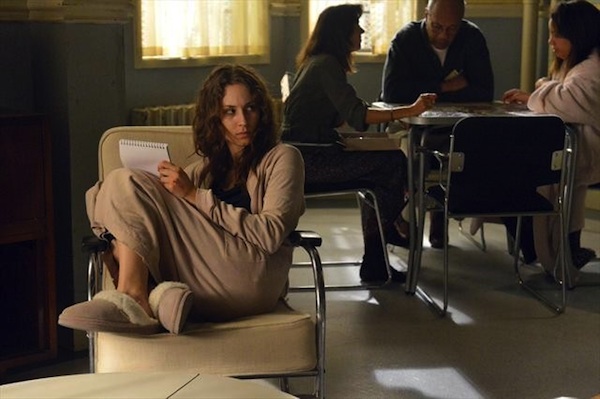 Spencer (Troian Bellisario) has taken a page from Mona’s book and entered Crazyville. She’s currently living it up in Radley pretending to suffer from amnesia so she can take a vacation from being the Spencer Hastings — because Spencer Hastings’ life sucks. Spencer is responsible for Toby’s death. Spencer has too many secrets she has to keep. Spencer’s in too much pain. A vacation would definitely do this girl some good, but maybe a tropical island or Paris is a better idea than a psych ward, but to each her own.

Unfortunately, she’s outed pretty quickly when her therapist shows up at Radley and recognizes her. Now Spencer has to explain how she wound up there. Dr. Sullivan tells the cops about Toby’s body, but when they search the woods, there is no proof that anyone was murdered there. Well, it wouldn’t be PLL if we knew for sure if Toby was dead or not.

While in Radley, Spencer makes an ally in E. Lamb, her nurse (remember E. Lamb was the alias Toby used to get in and out of Radley). E worked there when Mona was locked up and he also knew Toby. He has a lot of secrets that he’s not willing to admit quite yet, but I wouldn’t be surprised if Spencer tries to stick around just to get more info out of him.

Meanwhile, in the outside world, we do discover that one very important person isn’t dead. Detective Wilden is alive without a scratch on him. He is kind of stalking Hanna (Ashley Benson) and Ashley though because he seriously wants his cop car back. But, oops, it’s at the bottom of the lake. No one is going to find it because GPS systems don’t work underwater. Or according to Hanna, “Everyone knows nothing works under water.” Haha! She’s easily the most lovable character on this show.

To get away from super creeper Wilden, Ashley is taking a work trip to the Big Apple to see if she can get a promotion that will move the girls to the city for good. But, as these ladies should have learned by now, running and lying never fixes the problem. Also, when parents are out of town, it always seems to spell trouble.

At the end of the episode, Spencer gives a great tear-filled speech in a group therapy session that kinda proves she’s lost it and isn’t the person she used to be. Oh, things are getting really good now.