Barbara Walters revealed who gave her the chicken pox on Tuesday’s episode of The View. It was Frost/Nixon actor Frank Langella after the two shared a New Year’s kiss. 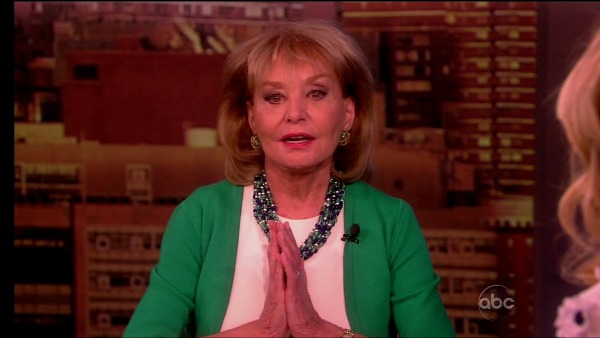 Barbara Walters is back on the air over at The View on ABC, but she made an intriguing remark on her first day back and it had the internet buzzing over who gave the famed newswoman the chicken pox.

After six weeks off of the air, Walters returned to the show on Monday.

She told the audience, “After a lot of scratching and a lot of rest, I am fine and I am healthy.”

Walters not only suffered a fall during inauguration weekend at the British ambassador’s home, she came down with the chicken pox shortly after her conscussion.

She revealed that the exposure to the common childhood illness happened before the dramatic fall. In fact, she shared that it happened on New Year’s Eve when she exchanged a kiss with a “well-known” actor.

Walters went on to discuss her recovery by saying, “The chicken pox came and went weeks ago. The head injury has taken longer… now happily my head is cleared and the concussion is over.”

However, she didn’t reveal the name of the actor until Tuesday. It was Frost/Nixon actor Frank Langella. The Oscar-nominated actor didn’t know he was suffering from a case of the shingles at the time and passed the virus on to The View host who had never had the illness as a child. Shingles and the chicken pox are caused by the same virus.

Langella has since recovered from his illness. Walters also admitted that she didn’t want to publicly name him, but the media did it for her.

The good news is that everyone is healthy with Walters sharing the stage again with her ladies on The View while Langella has five film and TV projects on his plate in 2013 and 2014.