Revolution star Billy Burke lets SheKnows in on all the love and drama we can expect to see when the show returns. 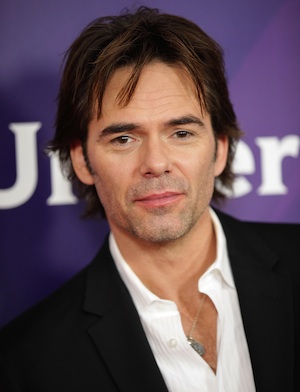 We all saw that moment on the Revolution winter finale when Miles and Rachel almost kissed. The tension was there. The history was clearly there. But what happened between the two? Will it go anywhere? Will this lead to a Miles/Rachel/Nora love triangle? Oh, there are so many questions!

Luckily, SheKnows had the chance to chat with Miles himself, Billy Burke, who gave us a few clues about what’s going down when the show returns.

“There’s definitely some history between Rachel and Miles,” Billy told SheKnows. “There’s also history between Miles and Nora as well. When all three of those people get forced into the same group there might be some crackle that is unwanted.”

It looks like Miles sure has a way with the ladies. “Somebody has to. I mean, in this world without power I feel like people would be hooking up left and right,” Billy laughed.

Other than the love-triangle drama, Miles has a lot of other serious issues on his plate in the upcoming episodes. Billy told us that Miles will certainly be struggling with his dark side and trying to keep all of his dirty laundry from surfacing.

Then there’s the lingering question about whether Miles with jump ship and rejoin the dangerous militia. “Miles is always on his own side. As self-preservationist as he is he can’t help but realize there are people now that he’ll do anything for. So, that’s the dilemma.”

Missed some Revolution episodes? Check out the recaps! >>

Perhaps the biggest drama will be centered on the show’s primary theme of power. Now that the power is back on will there be bigger obstacles and challenges? “That’s one of the biggest questions the show asks. Were we better off before or with power?” Ah, those deep questions make this show so much fun to watch. Well, that and Billy’s sexy sword fighting.

Watch all the love stories and drama unfold when the power comes back on March 25 on NBC.