Danica Patrick is used to blazing trails in the racing industry, first in IndyCar and now with NASCAR. We sit down with the 31-year-old racer to talk about her career — and get tips we can translate to our own careers. 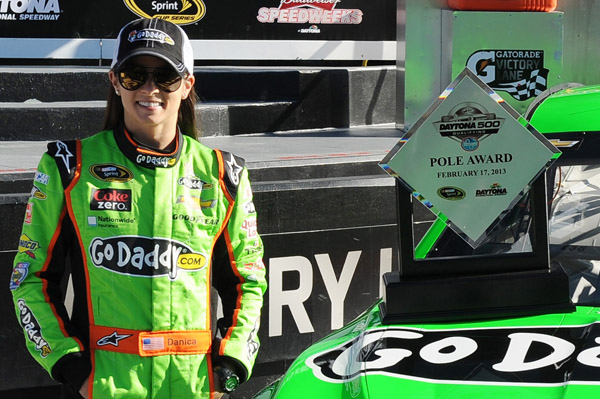 SheKnows: You made history this February by becoming the first woman to win a NASCAR pole position at the Daytona 500. How big of a moment was it for you in your career?

Danica Patrick: It was a very cool moment. I got a lot of recognition for it, but it was nice to get a moment to talk about all the people that it took to help me get there. Just a really nice moment.

SK: Was it a validating moment in your career?

DP: Someone said, “Did you realize you’re the first [woman] on the pole?” and I didn’t know. I usually don’t know about any statistics until I break them.

SK: A lot of young women look up to you as someone who has been a trailblazer in a male-dominated industry. What advice do you have for other women who are venturing on their own career paths?

DP: The most important thing is to find something that you love to do… find out what it is that you love. You can make a job out of anything, but if you have the passion you’ll follow through in the way you need to be a success. Those who don’t have [the passion] are the ones that quit early or don’t follow through on their dreams. It takes time.

Also, always be true to yourself so you have more confidence to deal with any odds that are stacked against you. I use that as a guideline so I don’t do anything I’m not comfortable with. I always stay true to who I am and only do things that are an extension of my personality, whether that’s a photo shoot, a race, a commercial, or even a video game.

SK: Speaking of video games, tell me about your role in the new Sonic & All-Stars Racing Transformed.

Danica Patrick is leading the drive to cure COPD >>

The thing I love about it is that it’s easy enough to play. I wouldn’t consider myself an avid game player, but I have a lot of fun with this game.

Check out Danica Patrick in the new Sonic & All-Stars Racing Transformed — now available for the Xbox 360, PlayStation 3, Wii U, PlayStation Vita and Nintendo 3DS, wherever games are sold.

Read on for more celebrity interviews

Jessica Alba’s new book: Honest advice on kids and cleaning
SheKnows gets the Dancing with the Stars scoop from Karina Smirnoff
Carrie Keagan talks on-set secrets and her dream guest