Since birthing double babies in September, True Blood star Anna Paquin has stayed out of the spotlight, save for a weekend trip to a toy store with twins in tow. 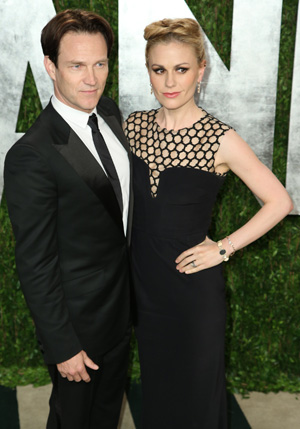 After having a child, every new mom goes through a period when she finds it near-impossible to get out of the house; naturally, the difficulty is doubled if there are twins in the bassinet.

But True Blood star Anna Paquin is starting to make appearances again, this weekend spotted in Venice, California, shopping at a toy store with husband (and True Blood co-star) Stephen Moyer, his daughter from a previous relationship, Lilac, 10, and the twins.

Moyer and Paquin haven’t confirmed the names of their twins, or even their genders. But Us Weekly reports that a source confirmed that the babies were a boy and a girl.

Tough to tell in the pap snaps grabbed of the toy-shopping family: both twins were dressed in gender-neutral colors. Paquin picked up one of the babies to kiss and snuggle him (or her); the other dozed in a stroller.

After a break to bond with the babies this fall, both Moyer and Paquin are at work shooting True Blood again.

They made post-baby red carpet appearances this awards season at the Vanity Fair Oscar Party, and at a Tom Ford cocktail party supporting Project Angel Food.

Someone’s been working hard in the gym: Paquin is even more slim and muscular post-baby than before.