The father of accused murderer Oscar Pistorius is on the outs with the rest of the family after making some damning comments about guns and the state of racial unrest in South Africa. 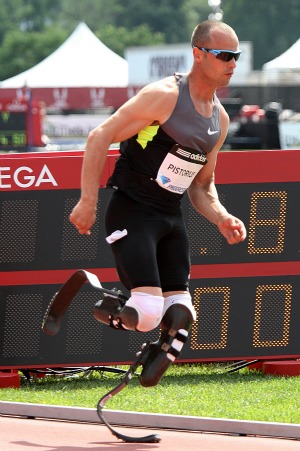 The family of Oscar Pistorius is distancing themselves from comments made by the Olympian’s father about the government not protecting its own citizens from violent crime and the country’s atmosphere of fear.

In an interview with the Telegraph, Henke Pistorius said the family has weapons not only for hunting and sport, but for self-defense — and was very critical of the ruling party of the South African government.

“Some of the guns are for hunting and some are for protection, the hand guns. It speaks to the ANC government, look at white crime levels, why protection is so poor in this country, it’s an aspect of our society,” he said.

“You can’t rely on the police, not because they are inefficient always but because crime is so rife.”

While Henke said he personally hasn’t used a gun for self-defense, he pointed out, “That doesn’t mean I haven’t been hijacked, attacked. As a family, we value life much too much to produce guns at every opportunity we can use them.”

“I have been in positions where I can use a gun but we have been brought up in a way that we value the lives of others very highly.”

ANC spokesman Jackson Mthembu hotly refuted the claims, saying, “Not only is this statement devoid of truth, it is also racist. It is sad that he has chosen to politicize a tragic incident that is still fresh in the minds of those affected and the public.”

The rest of the Pistorius family was quick to distance themselves from the father’s comments, likely because of fear Henke’s anti-government stance would hurt Oscar’s chances in court when he goes on trial for the murder of Reeva Steenkamp.

“The Pistorius family owns weapons purely for sport and hunting purposes,” family spokesperson Arnold Pistorius retorted in a statement. “Henke’s interview with the newspaper was unapproved by our media liaison team. The comments do not represent the views of Oscar or the rest of the Pistorius family.”

“We are acutely aware of the fact that we are only at the beginning of a long road to prove that what happened to Reeva Steenkamp was a terrible accident and that Oscar never intended to harm her, let alone cause her death.”

“As a family, and Oscar in particular, we will never be the same after the tragic events on 14 February this year. We are still in deep mourning, trying to come to terms with what happened. For this reason and out of respect for the Steenkamp family, the Pistorius family will not grant any media interviews at this time.”