One of Canada’s favorite couples has called it quits after having to commute constantly between Canada and Hollywood. 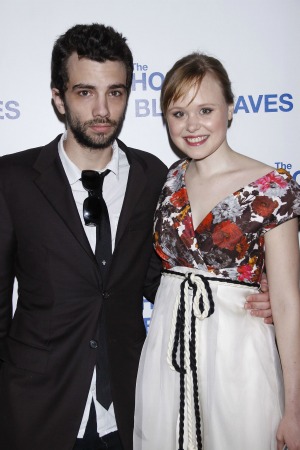 One of Canada’s “it” couples has officially called it quits. Jay Baruchel and Alison Pill have been engaged since 2010, but have apparently gone their separate ways.

Baruchel hinted at the breakup Feb. 16 on Twitter. “Alone again, naturally. Heartbroken,” he said. “I won’t be on twitter for awhile gang. Getting dumped rules.”

The message was later deleted.

The Newsroom gears up for Season 2 >>

Pill and Baruchel met in 2010 on the set of Goon, a film Baruchel co-wrote. The movie shows the Canadian in both of them, and stars Seann William Scott as a hockey player. The couple was engaged in December of that year, and had planned a wedding for September 2012 in Quebec.

“We’re getting married at an ice wine vineyard. Me and the groomsmen will all be wearing kilts!” Baruchel told Us Weekly in February 2012. “We’ll be welcomed in by uilleann pipers. It will be a very small, 70 person wedding, just friends and family.”

But the wedding didn’t happen, which may have been the first sign of trouble with the pair.

“Unfortunately, we’re two busy people who are intrinsically lazy,” Baruchel later said. “So in our free time, the last thing we want to do is book flights and organize hotel rooms for people. But it’ll happen at some point.”

According to Us Weekly, Pill showed up at an event in Hollywood on March 3 sans engagement ring. A source told the magazine the long-distance relationship was too difficult for the couple to handle.

Inside She’s Out of My League >>

“Working and living in Canada is something that [Baruchel] is very passionate about,” the source said. “He wanted her up there more often, but she really likes Newsroom and the opportunities that are there for her. They were doing the long distance [thing] a lot.”

Pill famously tweeted out a naked photo of herself last year… a picture that was meant for Baruchel. She is currently working on The Newsroom, which is shot in Hollywood.

Neither actor has commented on the split.