Ellen DeGeneres is asking the U.S. Supreme Court to make her marriage, and potentially millions of other gay people, legal — in the humbly funny way that only she can. 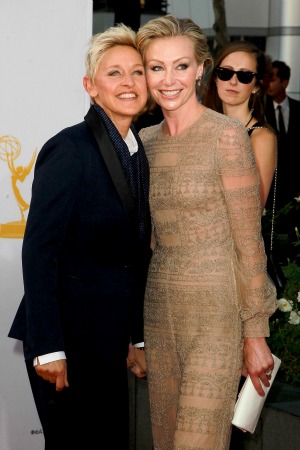 Ellen DeGeneres is getting political! The talk show host blogged a request to the U.S. Supreme Court asking it to overturn California’s Proposition 8 and allow gay couples to marry.

The comedian, who wed longtime partner Portia deRossi in 2008 when gay marriage was legal in the state, handled the serious issue with her trademark humor.

“California’s Proposition 8 is headed to the Supreme Court. Hundreds of companies and families as well as Republicans are submitting briefs urging the 9 judges to allow gay people to marry. I thought that was ridiculous. Why would judges want all of that underwear? Then, after a quick talk with some people, I found out what a brief was,” she wrote on her blog.

“I’ve never filed a brief to the Supreme Court, so I thought I would post mine here. I’m sure someone will tweet it to them.”

“Portia and I have been married for 4 years and they have been the happiest of my life. And in those 4 years, I don’t think we hurt anyone else’s marriage. I asked all of my neighbors and they say they’re fine.”

“But even though Portia and I got married in the short period of time when it was legal in California, there are 1,138 federal rights for married couples that we don’t have, including some that protect married people from losing their homes, or their savings or custody of their children.”

“The truth is, Portia and I aren’t as different from you as you might think. We’re just trying to find happiness in the bodies and minds we were given, like everyone else.”

“Coming out was one of the hardest things I ever did. I didn’t intend to be on the cover of Time magazine saying, ‘Yep, I’m gay.’ The truth is, I don’t even remember saying that. I mean, I definitely said the ‘I’m gay’ part. It’s the ‘yep’ I don’t remember. I’m not really a ‘yep’ person. ‘Yes siree Bob’ maybe. But not ‘yep.'”

“In the words of Benjamin Franklin, ‘We’re here, we’re queer, get over it.’ And there’s another famous quote that says ‘A society is judged by how it treats its weakest members.’ I couldn’t agree with that more. No one’s really sure who said it first, so if anyone asks, tell them I said it.”

“I hope the Supreme Court will do the right thing, and let everyone enjoy the same rights. It’s going to help keep families together. It’s going to make kids feel better about who they are. And it is time.”

The U.S. Supreme Court is expected to hear oral arguments in the case later this month.