A Showtime exec lets the big news slip during an interview: Dexter is over. 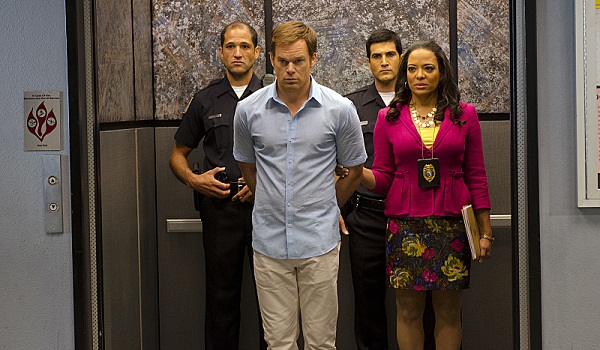 During a conference with Wall Street analysts in Palm Beach, Florida, Moonves was asked by one analyst what Showtime had up its sleeve and alluded to the inevitable end of Dexter.

Moonves fell for the bait, responding, “We have Ray Donovan coming on with Liev Schreiber, which comes on with Dexter‘s last season starting in June and then we have Masters of Sex.”

Showtime execs have not yet acknowledged Moonves’ slip-up, though. They were adamant with Hollywood Reporter that there’s still “nothing confirmed.” However, many people (including us) have seen signs of Dexter‘s demise for quite a while now. The Dexter-Debra story line seems backed into a corner. The way Showtime continues to anchor its new drama Ray Donovan to Dexter makes it seem almost as if Dexter was only ever renewed for Season 8 as a way to pull in viewers for Donovan.

Dexter is in hot water >>

What Showtime seems to fail to realize is that the official announcement would only boost ratings for Dexter. New and former fans will tune in to see how the show ends. Just as Showtime hopes, many will stick around afterward to see what all the fuss is about with Ray Donovan.

As for what’s ahead on Dexter‘s final season? That is anyone’s guess. Will it start in jail and have Dexter continuing his work from the inside? Dex killed a lot of people… but he’s still the lovable assassin. Is that what we want for him? Or do you hope to leave Dexter on a new beach somewhere, plotting his next move a la Silence of the Lambs?

How do you want Dexter to bid adieu?