Sydney and Lieberman have another epic failure of a date, Tina and Tyler are super awkward, and Dr. Villanueva puts everyone in their place in the latest episode of Monday Mornings. 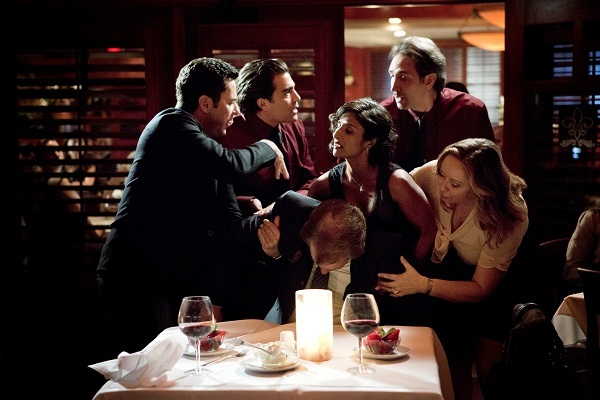 Sydney and Lieberman should quit while they are ahead. Last time they went out Syndey wound up saving someone from choking to death, and on this date she has to help a guy who passes out right at their table.

This poses two questions. 1) How often to people really have medical emergencies in a restaurant? I’ve never seen it happen. 2) Why is Sydney doing all the saving? Where’s Lieberman in this mix?

Although Sydney (Sarayu Rao) and Lieberman’s (Jonathan Silverman) budding romance can be intensely awkward at times, it’s nothing compared to what Dr. Tina Ridgeway (Jennifer Finnigan) and Dr. Tyler Wilson (Jamie Bamber) have going on. Before her pending divorce they could shack up at any time. Now that her marriage is officially over things are pretty awkward between the two. Maybe it’s the guilt after being caught or that “Oh crap, now you’re that single does that mean we have to commit?” feeling that creeps up once an affair has been outed. Either way, mild condolences and a friendly hug were all that the lovers shared this episode.

This week’s episode also tackled the wildly controversial “blood doping” issue made popular by super athlete Lance Armstrong. A swimmer winds up having a stroke from doping, which resulted in blood clots and loss of brain cells. Dr. Villanueva demands an immediate surgery and it happens (because you don’t say no to Ving Rhames). It takes a few different methods, but ultimately they are able to save the patient. This is the first time we’ve seen Villanueva save a life without also compromising medical ethics and hospital policy. Good job, Ving!

In surprising news, Dr. Hooten (Alfred Molina) actually made a mistake! Don’t we just love to see the mighty fall (or perhaps trip just a little then walk it off like no one saw it)? An old friend and mentor of Dr. Hooten’s, Wayne, is showing precursors to a stroke, but is still practicing medicine. Instead of calling Wayne out, like he would anyone else, he lets it slide. It takes an in-your-face-comment from Villanueva (again because Ving knows how to get things done) to make Dr. Hooten see that he’s showing favoritism. Hey, the rules apply to everyone or no one Dr. Hooten!

In the final moments of the show Wayne faces the hard truth that his health is fading. Maybe it’s time to hang up the stethoscope and embrace retirement. Don’t piña coladas on a warm beach sound better than the stale smell of a sterilized operating room anyway?