Carroll gets another win when he manipulates the system and winds up escaping and reuniting with his son. 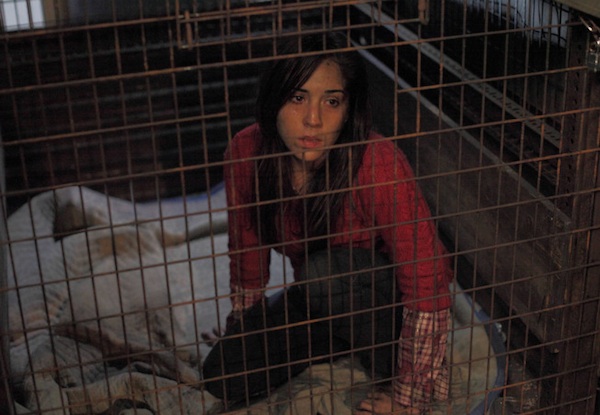 Last week we left off with Emma (Valorie Curry) escaping with Joey while leaving behind her boyfriend and his lover (Or is it their lover? I don’t know the appropriate word for what her and Paul have going on.). After Emma abandoned her confused followers/lovers, she met up with an even more twisted individual with a snaked tattoo who keeps a woman locked up in a cage. When will they learn people don’t make good pets?

Little Joey tries to rescue the caged woman, but he’s caught by the tattooed man. Emma tries to intervene, but she doesn’t have the same power over this guy that she had over Paul and Jacob and no one winds up escaping.

Ryan Hardy (Footloose‘s Kevin Bacon) is busy dealing with the aftermath of the failed attempt to rescue Joey, but he’s kind of failing at that too. Carroll (James Purefoy) requested a transfer to a different prison since he feels he’s been so poorly mistreated by the FBI. Hey, vicious serial killers have rights too! The request was granted. Could the warden be a follower too? Why not? Everyone else is!

Want more of The Following? You’ve got it! >>

Turns out the warden isn’t exactly a follower. His daughter happens to be the caged woman, hence his willingness to obey Carroll’s every command. Carroll uses his lawyer to escape in the transfer, and then kills her while he has Hardy on the phone. Carroll just loves to torture Hardy.

Things get a little more complicated when Hardy and Carroll wind up in the same place. Carroll has his chance to kill Hardy, but he passes on it because he’s trying to write the perfect novel and this isn’t how his story should end. I know, he’s massively obsessed with this Hardy rivalry. A few other people die gruesome deaths along the way and eventually Carroll is reunited with his son.

Meanwhile, Claire (Natalie Zea) is put in protective custody to keep her safe from her serial killer ex-husband. Oh, how the tables have turned. Things are certainly not boding well for Claire and Ryan Hardy these days. They keep digging themselves into a deeper hole. They are just puppets and Carroll is clearly the puppet master. Dance puppets, dance.