The beloved film The Wizard of Oz finally has a prequel and it doesn’t disappoint. The lush, colorful CGI and wizardry of 3D provide us millennials an experience on par with what the audiences of 1939 must have experienced when the humdrum black and white film turned into terrific Technicolor when Dorothy landed in Oz. This tornado-torn adventure is certainly worth a sugary welcome from the Lollipop Guild. 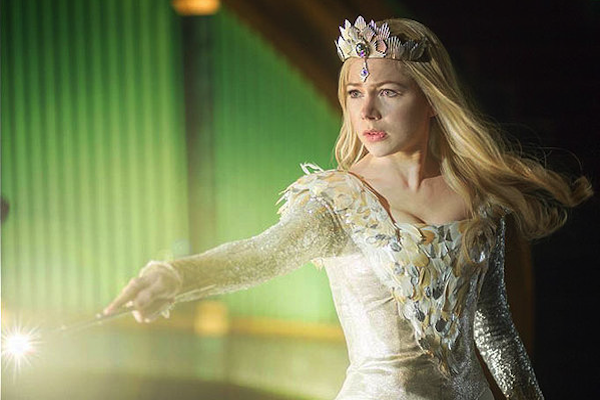 4 Stars: Perfect for the next generation of Oz lovers

Oz the Great and Powerful starts in dusty Kansas, 1905. Cleverly, it begins not only in black and white, but also in a lower aspect ratio that uses only about two-thirds of the movie screen.

We meet Oscar (James Franco), or Oz as he’s called when performing in a traveling circus named The Baum Brothers Circus — a nod to the story’s original author, L. Frank Baum. Oz loves the ladies. So much in fact that he can’t settle on just one.

When lovely farm girl Annie (Michelle Williams) comes to visit Oscar, it’s clear she’s fallen in love with him. Wearing a gingham dress that references Dorothy’s classic blue one, she tells Oscar she’s had a marriage proposal from another man and wonders if he thinks she should take it.

Oz’s heart breaks for a moment, longing to be with Annie but knowing he could never be the family man she wants him to be. He’s a commitment phobe and a playboy and thinks she’ll be better off with someone else more worthy of her.

Battle of the flicks: Oz VS. Dead Man Down >> 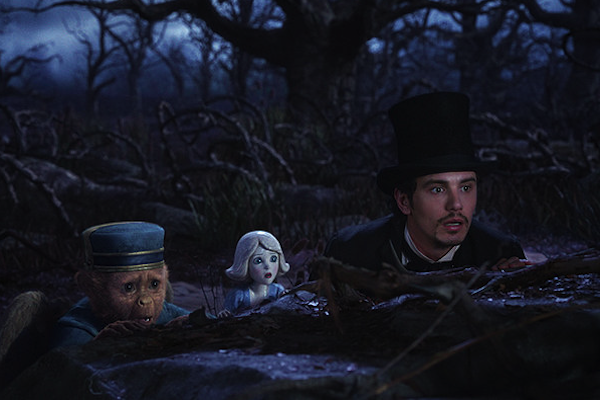 Before long, Oz’s womanizing gets him into some hot water and he flees the circus in his hot air balloon just as a twister is tapping down. Like Dorothy, he’s sucked through a wormhole in the tornado, landing him in the merry old Land of Oz. Here, the screen magically expands to full size and the color literally explodes in 3D.

The rainbows, the soap bubbles and the flowers are all nearly overwhelming in their visual perfection. This is a land never before seen and possibly the best use of 3D technology ever.

Oz soon meets three witchy-sisters, the first is Theodora (Mila Kunis), a girl so pretty and sweet, Oz is shocked when she reveals she’s a witch. A charmer, Oz easily wins over Theodora’s heart and learns of a prophecy about a new wizard who will arrive in Oz to save its people from evil. Theodora believes he is that prophet. 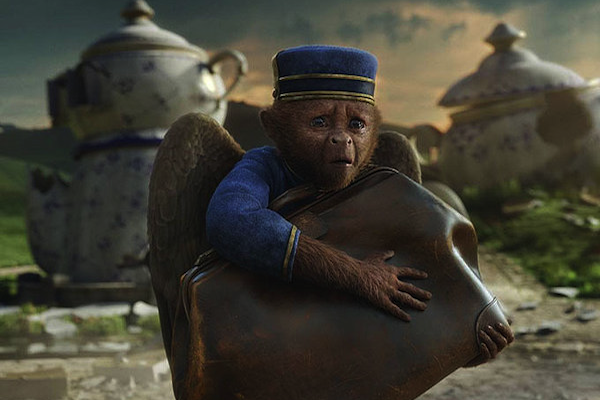 Once at the Emerald City, Oz meets Theodora’s sister Evanora (Rachel Weisz), a seductress with a clear evil streak. But it’s not until Oz meets their estranged sister Glinda (Michelle Williams again) that he starts to understand the bigger picture. Glinda is the one with a pure heart and Oz knows he must do whatever it takes to help her battle her evil siblings.

Rachel Weisz cut from her new film To the Wonder >>

While this film lacks Dorothy’s emotional coming-of-age journey about a teen rebelling from her family, there’s lots of entertainment to be had. Like Dorothy, Oz collects some friends along the yellow brick road that have doppelgangers back in Kansas. A tiny monkey named Finley (Zach Braff) in a blue bellhop suit and the broken porcelain doll named China Girl (Joey King) take the place of the Cowardly Lion and the rusty Tin Man.

Multicultural Munchkins abound, as do the inventive Tinkers, who create a steampunk edge when Oz teaches them Thomas Edison-inspired tactics to battle the evil witches.

Bottom line: If you’re expecting this film to equal the magic and beauty of its classic predecessor, you’ll likely be disappointed. But if you’re looking to enjoy a pleasant trip to a visually stunning land of good and evil, power and beauty, you’ll surely be over the rainbow. This is a must-see in 3D!

The running time is 2 hours, 10 minutes, and there are no extra scenes at the end of the credits.