On This Week, ex-NBA player Dennis Rodman defended North Korea’s Kim Jong Un, calling the dictator “my friend” and espousing his new BFF’s virtues. But is this the eccentric baller’s strangest outburst to date? We look at the most questionable quotes from the newly self-appointed goodwill ambassador. 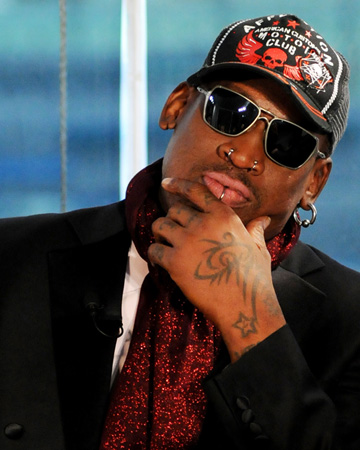 Wait, say what? Rodman would apparently have us believe that Clinton’s sexual misconduct and Jong Un’s crimes against humanity are simply a po-tay-to, po-tar-to kind of matter. He also divulged during his appearance on This Week with George Stephanopoulos that the 28-year-old North Korean tyrant is a “good guy” and a “good leader” who only wants one thing — for President Obama to give him a call.

“They say Elvis is dead. I say, no, you’re looking at him. Elvis isn’t dead; he just changed color.”

You know, now that you mention it, Dennis, you do bear a remarkable likeness to the King. I mean, aside from your copious amount of body piercings, your impressive array of tattoos, your lack of any true musical talent, and your career as an NBA player… but other than those nuances, you and Elvis are, like, total twinsies — for real. We get it.

“For five years, I’ve felt like the best prostitute in a high-class whorehouse. But all the other girls get paid more than I do.”

While we imagine this was meant to be more of a commentary on his dissatisfaction with the politics of NBA pay, it feels a bit like a big ol’ Freudian bag of worms. Of all the analogies Rodman could have made, why did he default to hookers? And doesn’t this analogy by nature negate the use of the term “high-class” in any capacity? We bet a psychologist would have a field day analyzing the inner workings of this guy.

“I wear women’s legging under my clothes, but no lingerie.”

First of all, we beg to differ. We seem to recall some photos floating around of Rodman rocking a women’s black lingerie camisole on one of his several 50th birthday party outings. But, hey, now that we’ve gotten that out of the way, we say rock on, sistah. We don’t mind one bit if you feel pretty in a pair of tights! Maybe they’ll decide to cast a sequel for To Wong Foo, Thanks for Everything! Julie Newmar — Rodman and Wesley Snipes would slay as drag queen co-stars.

Do you think Rodman’s remarks about Kim Jong Un are his wackiest words yet? Let us know via comment!