Casey Anthony likely doesn’t have much public sympathy, but that doesn’t stop her from living off others. Anthony commented on her dire financial status today in court. 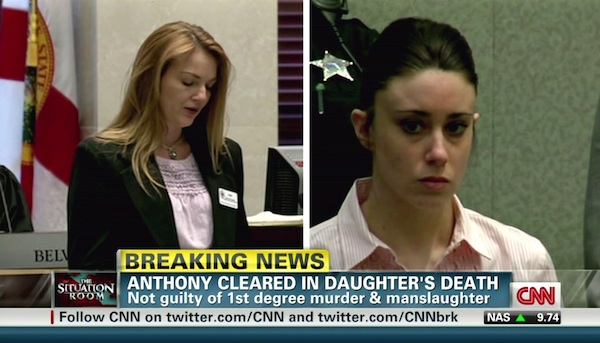 Do you feel sorry for Casey Anthony?

Anthony hopes her bankruptcy judge will show her some compassion as she made her first public appearance since her acquittal of her daughter’s murder in the summer of 2011. Anthony left jail in July 2011.

Anthony appeared before a Florida judge this morning to explain the details surrounding her financial distress and why she is unable to pay back the almost $800,000 she owes to various creditors. The Associated Press said Anthony told the judge she’s unemployed, has about $1,000 to her name and lives off the generosity of others for all of her basic necessities including food, rent and utilities.

Does Casey Anthony have a sugar daddy? >>

Said Anthony, “I don’t pay rent. I don’t pay utilities. I guess you could say I’m living free of the kindness of others.” Casey, who is 26 years old, said she survives off friends and money given to her by strangers through gift cards and cash. The AP says she earned about $200,000 for personal photographs which in turn paid for her criminal defense. Anthony states she still owes about $400,000 in legal fees and court fees.

As for why she’s been unable to work? USA Today reports Anthony’s lawyer told local news station WTSP that Anthony has received death threats as well as notice that a $50,000 bounty on her life is currently being offered. In order to remain safe, Anthony must remain as far out of the public eye as possible.

Casey Anthony filed for bankruptcy in Jan. 2013 and stated she has not received any offers for book, movie or television deals.