The briefest of peeks into the new season of Mad Men. 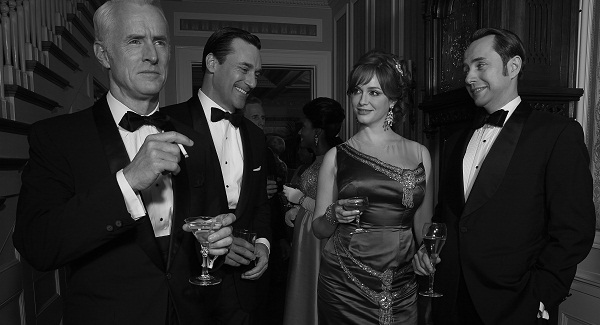 Remember those promo shots from a fancy Mad Men party that AMC released a while back? Did they get you excited for the return of Mad Men and the continuation of Don Draper’s life story? Us, too. Now AMC has put together a montage of those shots to help tickle our fancy until the show premieres. We’re sure there are more promos on the way. (There have to be, right?!) Until then, we thought we’d share this gem of a teaser with you!

“You’re invited to the affair of the year,” huh? Interesting choice of words, is it not? Based on the clues in the pictures, do you think Don Draper (Jon Hamm) will end up having an affair with whomever Sally’s new teacher is… or maybe his ex-wife, Bets? Is Red/Joanie (the beautiful Christina Hendricks) off-limits or will arendezvous avec her ever happen?

Whoever lands in Don Draper’s bed next, we’re sure she’ll be gorgeous. And we’re 100 percent certain she won’t last long. Who do you want to see Draper hook up with this season? Would you take a turn in Don’s bed? We would! We’re still waiting for the official pictures of Don on the beach, though! If he’s not shirtless we’re only… mildly interested.

Is your love life anything like Don Draper’s? (Outside of your dreams, that is) >>

After ten long months, Mad Men‘s sixth season premieres on Sunday, April 7 at 9/8c on AMC. The following week it will move to its regular time of 10/9c.