Mary-Kate Olsen and Oliver Sarkozy are coming up on one year together — the pair began dating in May 2012 — and Olsen and Sarkozy’s latest outing has many wondering: are the two engaged? 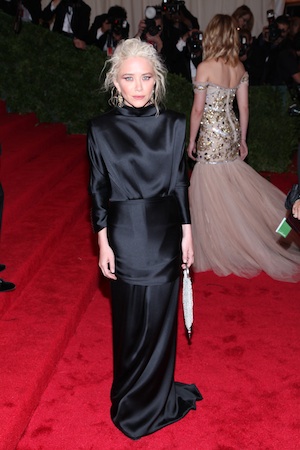 Mary-Kate Olson is engaged? That’s the recent rumor floating around gossip sites after Olsen and her much older boyfriend Oliver Sarkozy went heavy on the PDA at a New York Knicks game and it appeared Mary-Kate was showing off a little jewelry: a gold band on her left ring finger.

Mary-Kate Olsen gets political with Sarkozy >>

Olsen and Sarkozy began dating in May 2012 and despite their nearly 20-year age difference — Olsen is 26 years old and Sarkozy is 43 years old — the couple seems madly in love.

Mary-Kate and Oliver were spotted ring shopping in Paris in January and she began wearing a gold band just a short time later. At the time, Mary-Kate Olsen’s rep denied the engagement rumors. Now, after Olsen and Sarkozy showed up at the Knicks game, fans are not yet convinced the couple remains simply boyfriend and girlfriend.

Mary-Kate and her boyfriend Oliver Sarkozy are creeping everyone out >>

Upon further inspection of the pictures of Olsen and Sarkozy at the Knicks game, though, it appears Mary-Kate is also wearing either the same or a very similar gold band on her right ring finger.

Yahoo!’s omg! reports Oliver Sarkozy just split from his wife of 13 years in 2012 and that rumors the two are engaged remains speculation since Mary-Kate’s rep has yet to return calls on the rumor.