A cranky Justin Bieber rails against the club that was supposed to host his epic 19th birthday party, and refutes claims he tried to sneak underage Jaden Smith in. 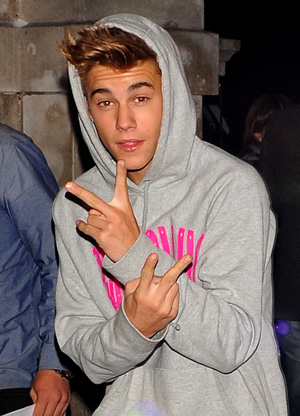 A source “connected” with Cirque du Soir told Us Weekly that the problems occurred after the “Beauty and the Beat” singer brought 14-year-old Jaden Smith, the son of Will and Jada Pinkett Smith, as a guest.

Bieber, current girlfriend Ella-Paige Roberts Clarke, Smith and others were asked to leave the club after a fracas ignited between Bieber’s people and club security, The Huffington Post reports.

Justin Bieber lost his clothes at his birthday celebration >>

Bieber fought back on Instagram, posting a blank, black image with a comment referencing “the funny moment when people believe I brought underage people to a club.. U think Will [Smith] is letting his 14 year old in a club, I don’t think so..”

Bieber then went on to attack Cirque du Soir: “2nd I love how the club wanted to give the press another reason to why we didn’t stay at their weak a** club so they wouldn’t look bad for me walking in and right back out..”

So Bieber dumped Cirque du Soir, they didn’t dump him. Got it?

Finally, Bieber’s addressed the comments he got on Twitter after the “worst birthday” tweet; things like, “I think @justinbieber needs to stop bitching about having a bad birthday. He is a billionaire and drives exotic cars. People are homeless.”

“i said m ‘worst bday’ but that was due to dummies pushing over my fans and being overly aggressive. Btw it wasn’t the worst bday cuz all my friends from back home flew in I was just mad in the moment,” Bieber said in his Instagram post.

The Huffington Post also reports that Bieber buddy Lil Twist was pulled over on Friday while driving Bieber’s Fisker Karma on California’s 101 freeway.

According to TMZ, Lil Twist was pulled over for making an unsafe lane change; that charge was dropped but he was ticketed for the tinted windows on the fancy sports sedan, which The Huffington Post says cost over $100K.

Gossip watchers will remember that Lil Twist got a ticket in Bieber’s Ferrari on Jan. 1, the same day a photographer was struck by another car and killed while he was attempting to get a shot of a Bieber ticketing in progress.