The actor and his girlfriend of three years announced their engagement last week, but says when he first met her, he didn’t think he had any chance with her. 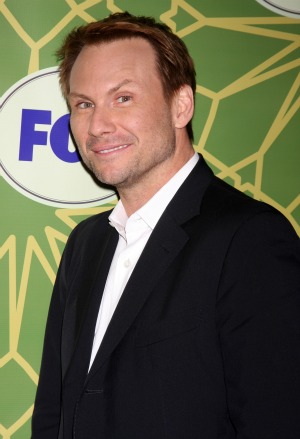 Actor Christian Slater announced his engagement to girlfriend Brittany Lopez on the Feb. 27 episode of Late Night with Jimmy Fallon. But the actor said when he first met her, he didn’t think he had any chance.

The 43-year-old met Lopez in 2009 at the Little Palm Island Resort near Miami, and when he did, he thought she was a lesbian.

“This girl came walking along with another lady, a slightly older lady,” Slater told Fallon, according to Us Weekly. “I was sitting in my usual spot, eating my oatmeal…and this spot was famous for people proposing to each other. It was very, very nice. So she’s there, and the next thing I know, she gets down on one knee and proposes to this older lady.”

He said he thought it was a happy moment, but it ended up not being what it seemed.

“I thought I had just witnessed a nice lesbian engagement, so I was coming over to say congratulations, but it turns out it was her aunt, and she was just trying to help her aunt capture the beauty and the romance of the moment,” he said. “She was making a joke, and I witnessed it, and it intrigued me, and the next thing I knew, we were hanging out in the Everglades.”

Haddon was arrested in 2003 for allegedly assaulting Slater during an argument at the Palms Hotel in Las Vegas. They separated shortly after the fight and were officially divorced in 2007. Slater also dated Jimmy Choo founder in 2007 but they broke up in 2009, due to “the pressures of their respective careers,” according to The Huffington Post.

Slater and Lopez have been dating for three years. Congrats to the happy couple!