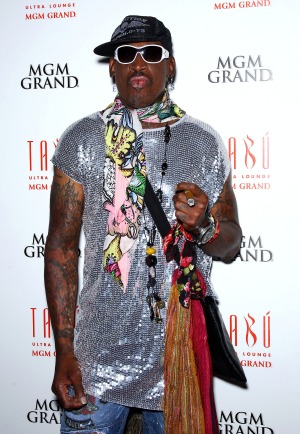 It sounds like the premise for a sitcom pilot that won’t make it past a single network exec: Former NBA star travels to the Far East and befriends evil dictator. After many shenanigans, World War III is adverted.

Rodman traveled through Pyongyang with the Harlem Globetrotters and a camera crew from the upcoming HBO series Vice where they were warmly welcomed by Kim and enjoying activities most North Koreans never experience, such as ice skating, a visit to the aquarium, and a long, luxurious dinner and drinks.

Is Dennis Rodman heading to jail? >>

And during this lovefest, Rodman found out Kim Jong Un has one request for President Obama: Call me, maybe?

Rodman even offered some advice on opening the convo with some common ground. “[Kim] loves basketball. And I said the same thing, I said, ‘Obama loves basketball.’ Let’s start there,” Rodman said.

“He loves power. He loves control,” Rodman explained. “But guess what? He doesn’t want war. That’s one thing he doesn’t want.”

According to the Human RIghts Watch, North Korea has a “dire human rights record” — one that has not improved since Kim took over after the death of his father Kim Jong-II in December 2011.

“The Democratic People’s Republic of Korea (North Korea) systematically violates the rights of its population,” the organization says on its website. “The government has ratified four key international human rights treaties and includes rights protections in its constitution, but does not allow organized political opposition, free media, functioning civil society, or religious freedom.

Arbitrary arrest, detention, lack of due process, and torture and ill-treatment of detainees remain serious and pervasive problems. North Korea also practices collective punishment for various anti-state offenses, for which it enslaves hundreds of thousands of citizens in prison camps, including children. The government periodically publicly executes citizens for stealing state property, hoarding food, and other ‘anti-socialist’ crimes, and maintains policies that have continually subjected North Koreans to food shortages and famine.”

All this was pointed out to Rodman, who was pretty much like “whatevs.”

“What I saw in that country … I saw people respect him and his family,” he said. “They’re great leaders there.”