Rick runs into an old friend when he leaves the prison in search of weapons. Sadly, he’s not the man he used to be or the ally Rick needs. 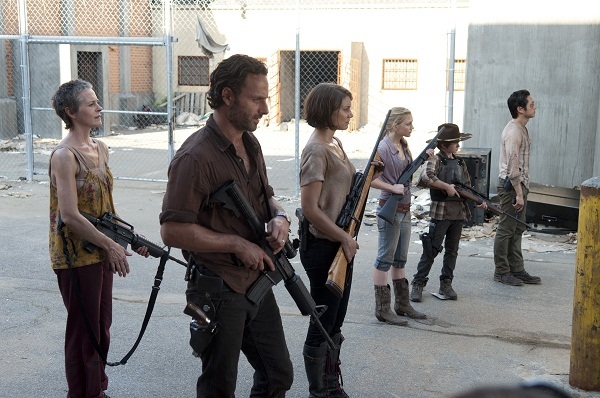 Walking Dead fans rejoice! We finally have the answer to a series-long question, “What became of Morgan and his son?” And it’s even sadder than we anticipated.

You remember Morgan from the very first episode. Rick (Andrew Lincoln) was waking up in Zombieland and didn’t know how to survive. Morgan generously took him in and saved his life. The two promised to find each other again and try to communicate through walkie-talkies every morning, but Morgan was never heard from again. Now, a year later, Rick ventures back to his old neighborhood (I thought they had traveled farther by now) where he runs into a very distraught Morgan.

First off, Morgan has become king of booby traps and governors his street by wearing a bada** shaded motorcycle helmet and body armor and kills people from rooftops. He tries to kill Rick, Carl (Chandler Riggs) and Michonne (Danai Gurira), who were only trying to find more guns. Trigger-happy Carl actually shot Morgan, but luckily Morgan was saved by a bulletproof vest.

Once the dust settles and the men realize they know each other things get brutal. Literally. Morgan is one fry short of a happy meal these days. His home is filled with traps that look like they’re straight from the Saw movies. Then Morgan stabs Rick (nothing fatal) and he finally breaks down in a moving emotional speech. He tried the walkie-talkie every morning waiting to hear from Rick but he was, “Never there!”

Morgan’s son died when they ran into his walker mother and he didn’t have the heart to kill her. Now he has sheltered himself from the walkers, but probably more so from dangerous people and has given up on humanity. He even begs Rick to kill him. But obviously he still has some fight left in him since fighting is all he seems to do. Rick invites him to live with them, but he turns him down. It’s probably safer for everyone that way, but I do hope we see more of him.

This episode was mostly dedicated to the Rick/ Morgan reunion, but there was also some bonding between Carl and Michonne. Michonne fights off a horde of zombies to get a family photo of Carl and his parents. She also tries to make a joke. She fails, but the attempt was nice. Maybe the group will start to accept her now and she can lighten up on the sour death stares.