The big day is coming up soon for Jennifer Aniston and Justin Theroux. People has all of the inside details on their upcoming nuptials. 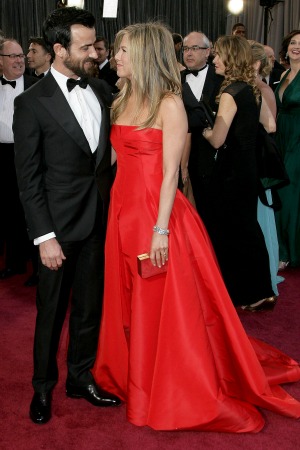 Jennifer Aniston‘s fans have been waiting for their favorite star’s big day and it appears that day is getting closer. In this week’s People cover story, the wedding countdown for Aniston and her fiancé Justin Theroux has begun.

The wedding will happen soon, but not before the actress finishes shooting her latest film, Untitled Elmore Leonard Project, on March 8 in Connecticut. However, the bride-to-be has handled many of the major wedding tasks already, including setting the date, picking out wedding bands and deciding on a dress.

A source told People about the 44-year-old’s current state of mind, saying, “Jen seems more confident than ever and they’ve become a great team.”

Her 41-year-old husband-to-be doesn’t seem to mind that the spotlight is on Aniston most of the time. The two met during the filming of Wanderlust and started spending a lot of time together back in May 2011.

They got engaged about four months after Aniston’s ex-husband Brad Pitt and Angelina Jolie did, so there was plenty of comparison in the press about the supposedly competing couples. Let’s hope that the Aniston-Theroux wedding will end all of that ridiculous speculation.

Jennifer Aniston’s yellow bling is worth a lot of green >>

Besides, fans still have to wonder where Aniston is getting married. Or when she’s going to have that baby bump that the press has been giving her all of these years.

One thing is for certain, according to People‘s inside source: “It will be a small affair with their closest friends.”

It sounds like a perfect day for America’s sweetheart.