Paris Hilton isn’t about to let River Viiperi’s skiing injuries get her down. The heiress recently pouted and posed for the camera while her boyfriend was put on a stretcher and taken to the hospital! 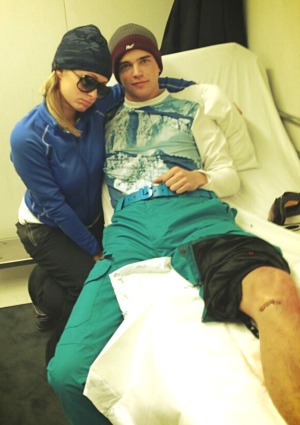 Paris Hilton can make any situation into a photo opportunity. From the red carpet to the ski slopes and emergency room, the snap-happy heiress continues to strike a pose for the camera.

Despite boyfriend River Viiperi’s grisly ski accident — which required him being hauled away on a backboard by paramedics and to have 19 stitches put in his leg — Paris Hilton kept right on snapping photos.

“Such a scary day on the slopes today,” the 32-year-old wrote on her Pheed account along with a photo of herself in front of Viiperi strapped into a stretcher while still on the slope.

She continued, “After seeing the gash on @RiverViiperi’s leg, I almost passed out. I have never seen a cut that deep in my life. He is so brave, I can’t even imagine the pain he went through today.”

Along with the photo seen here of lucky gambling gal Paris Hilton wearing an appropriate pouty face in the ER, the 21-year-old Spanish model tweeted of their adventure gone awry, “Back in Lalaland safe & sound thanks to my gorgeous blondie @ParisHilton always taking such good care of me.”

Paris Hilton’s boyfriend arrested after she kisses a woman >>

The pair began dating in September after meeting at New York Fashion Week. Showbiz Spy claims marriage may be in their future, quoting an unidentified source who gossiped, “Paris asked for River’s hand because so many of her friends are engaged or already married with kids, and she didn’t want to be some sad, old loser left on the shelf.”

“It’s incredibly impulsive because they’ve only been together a few months, but Paris believes River is the one,” the source added. “He’s given her an enthusiastic yes, but they’re keeping the engagement quiet for now.”

Perhaps it’s finally time for Paris Hilton to settle down?