David Beckham’s H&M ad is undoubtedly hot, but is it all him? The soccer star has responded to rumors the bum we see is that of a body double. 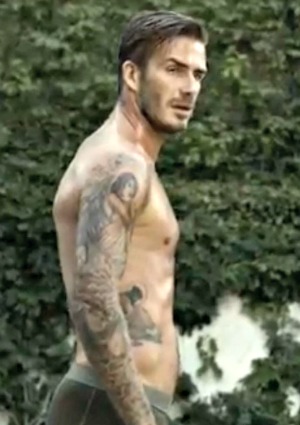 A body double for David Beckham‘s H&M ad? Certainly not! The father of four and husband of Victoria Beckham is here to assure those questioning whose backside they’re ogling that it is indeed him modeling the underwear.

Attempting to put speculation of a butt-double to rest, David Beckham said during an appearance on French television show Le Grand Journal Thursday night, “I can say the crotch is mine and the backside is mine as well.”

The half-naked hunk added, “I heard this the other day. Someone said that I had a stand-in for my bum, but no, I can confirm that’s my bum.”

The body double rumors weren’t only conspiracy theories, however. A rep for H&M said in a statement previously about the Guy Ritchie -directed short film, “David was very involved in the advert including doing most of the stunts. Due to his tight schedule a body double was used in smaller parts of the video.”

While it’s still not entirely clear which parts the body double did stand in for, David Beckham has officially claimed the bum- and crotch-shots as all his. Drool away.

Don’t get your hopes up about the 37-year-old modeling full time, however, as the soccer star said recently that while being in front of the camera is tempting, “Playing football is all I’ve ever wanted to do.”

Need another look? Check out David Beckham’s H&M underwear and again… and again!