He’s going to be one super hot pop, too! 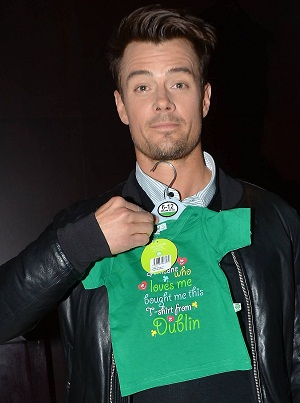 People recently talked to Josh Duhamel about the upcoming arrival of his first kid. It sounds like Duhamel is just as glowing as his bump-sporting wife Fergie!

First, he appears to be even more in love with his pop star wife (as if that was even possible). He says she looks better than ever.

“She looks so beautiful,” he told People. “I look at her now as not only as my beautiful wife, but also as the woman carrying our child. That takes our relationship to a whole new level.”

Aww! What a hubby!

If his hubalicious ways don’t make you swoon, maybe his baby bonding will. He also told the magazine that he’s already finding new ways to get to know the Duhamel-on-the-way.

Cinematic proof that Josh is ready to be a dad >>

“I’ve had full conversations with the baby already,” Duhamel teased. “I’m trying my best to communicate from beyond the womb. Whether it can hear me, I don’t know, but I’m talking to it a lot.”

Josh said he’s even ready for all the less fun stuff that comes with being a dad.

“I actually look forward to that stuff that people warn you about,” he said. “I don’t mind waking up and dealing with the middle of the night stuff. I wake up early anyway. So I’m definitely ready for it. More so than I’ve ever been.”

What a gusher! In the interview, Josh talks about how he would have never been prepared for a baby at 24 years old. The Safe Haven star is 40 now and it sounds like he’s beyond just being “ready,” but is also eager. For the full interview, head on over to People.com.

If you ask us, there’s nothing hotter than an attentive daddy. Put a baby in your average Joe’s arms and he ends up looking almost as hot as Duhamel himself! We can’t wait to see how much hotter Josh gets once he’s sporting a mini-me!