Joan Rivers is under fire for a tactless one-liner that made light of the deaths of millions in a horriffically brutal way. Why won’t she say she’s sorry? 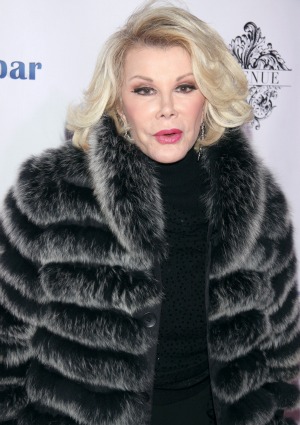 Fat-shaming Adele is the least of Joan Rivers’ worries: The PC police are gunning for the chief of the Fashion Police! Rivers is in hot water for making a tasteless joke about Heidi Klum and the Holocaust, but the controversial comedian refuses to back down.

“The last time a German looked this hot was when they were pushing Jews into the ovens,” Rivers shockingly “joked.”

Yup, knocked the wind out of us, too.

Know who else wasn’t amused? The Anti-Defamation League. “Of all people, Joan Rivers should know better. This remark is so vulgar and offensive to Jews and Holocaust survivors, and indeed to all Americans, that we cannot believe it made it to the airwaves,” said ADL national director Abraham Foxman.

“There are certain things about the Holocaust that should be taboo. This is especially true for Jews, for whom the Holocaust is still a deeply painful memory.”

“It is vulgar and offensive for anybody to use the death of 6 million Jews and millions of others in the Holocaust to make a joke, but this is especially true for someone who is Jewish and who proudly and publicly wears her Jewishness on her sleeve,” Foxman finished.

But Rivers is utterly unrepentant. In a statement to ABC News, the comedian refused to apologize.

“My husband lost the majority of his family at Auschwitz, and I can assure you that I have always made it a point to remind people of the Holocaust through humor.”

This isn’t the first time Rivers has run afoul of the ADL. Last year she compared Costco to Nazi Germany when the retail chain refused to carry her book.