Kanye West is causing Taylor Swift trouble yet again, but instead of completely siding with Beyoncé this time around, the rapper appears to have a beef with her as well! 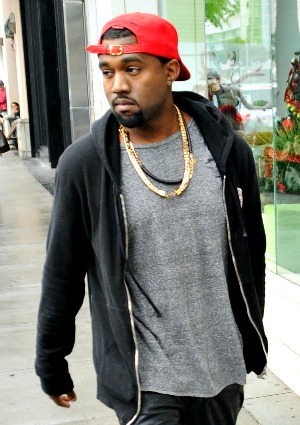 Kanye West‘s Taylor Swift encounters have a history of going poorly. Three years after interrupting the young songstress at the MTV Video Music Awards, the soon-to-be father has taken aim yet again — and this time both Swift and Beyoncé (among others) were caught in the commentary!

The day after a steamy photo of shirtless Kanye West embracing pregnant girlfriend Kim Kardashian sent tongues wagging, word comes that Taylor Swift and Beyoncé were both a topic of discussion at one of the 35-year-old’s recent concerts.

Reigniting the “Imma let you finish” drama from 2009, he vented to those in attendance, “Taylor Swift beat Beyoncé at the Grammys? Beyoncé be dancing in heels and s***.”

Though he’s impressed with Blue Ivy’s mom‘s fancy footwork and (sometimes controversial) footwear, the “Love Lockdown” singer doesn’t love everything Mrs. Jay-Z has been up to lately.

West went on a rant recently, referencing a pop star’s mega-deal with a soft drink company, but we don’t know if he was talking about Swift or Beyoncé. Swift penned a deal with Diet Coke, while Beyoncé is the brand ambassador for Pepsi. West went on to say:

“Can I sell a drink for you please? So you can help me put on a better show. Please corporations. Can you please support me, Kanye West? I swear I’m a nice n**** now. I swear I’ll put the pink polo back on. I swear to you. Please? Just for three million dollars. I need it so bad. I need a new pool in my back yard. So I’ll tell all my fans your s*** is cool. And if they believe in me they should also believe in you… What’s my public rating now? Are people liking me again? Enough to get some money for some corporations? They forgot about the whole Beyoncé thing right? Okay cool.”

While Jay-Z is still apparently still on West’s good side, he added of his friend’s collaboration with Justin Timberlake, “I ain’t f***ing with that ‘Suit & Tie’.”

What do you make of Kanye West’s Taylor Swift and Beyoncé rant?