Morrissey’s comeback: Fraught with oh, snaps! The 53-year-old singer has been feuding with Jimmy Kimmel all week; now Paul McCartney and his knighthood are in his sights. 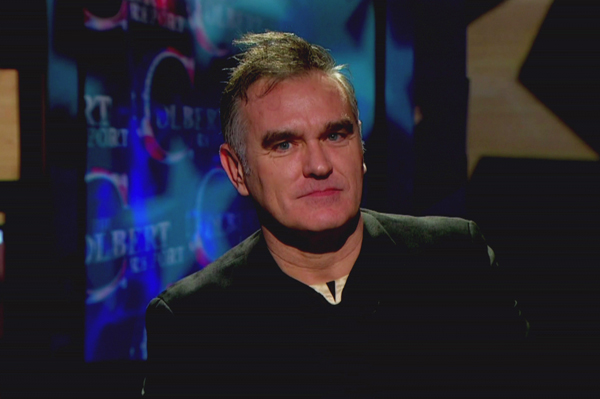 Fresh from a feud with Jimmy Kimmel, Morrissey ripped into Paul McCartney this week, implying he’s a hypocrite for accepting his knighthood from the Queen of England.

According to Morrissey, the beef is over his forthcoming show at the Los Angeles Staples Center. On the former Smiths lead singer’s insistence, the Staples Center is contractually prohibited from selling “flesh as food” the night Morrissey performs (March 1).

In addition, the McDonald’s inside the Staples Center will be closed for the evening, reports Spin.

Morrissey’s announcement that Staples was going vegetarian for a night included a possible dig at McCartney: “This request had previously been denied Sir Paul McCartney.”

Huh. What’s that about?

Morrissey told The Hollywood Reporter that he’d heard “Sir Paul McCartload was very angry that Staples had said yes to me but no to him, when really, he should be happy for any victory on behalf of the animals.”

“I know he works tirelessly for the People for the Ethical Treatment of Animals [PETA], but he also loves the British royals, whose treatment of animals is abysmal,” Morrissey continued. “The Queen herself wears enough fur to blanket most of Russia. He also once sang ‘Give Ireland back to the Irish,’ which was directed at the Queen. Well, she refused, and she still refuses, yet Sir Paul gives her the thumbs up! If he cared passionately about animals, he’d return his knighthood.”

Gotta hand it to Morrissey, he does stick to his principles, no matter how many people he has to tick off to do it.

In 2009 Morrissey famously stormed offstage at the Coachella Festival, complaining about the smell of “burning flesh.” Spin notes that “festival promoters Goldenvoice later offered him an entirely meatless Coachella if he’d headline with a reunited Smiths — denied.”