Kaley Cuoco is a rebel! At least when it comes to defying the network that pays for her series, The Big Bang Theory. 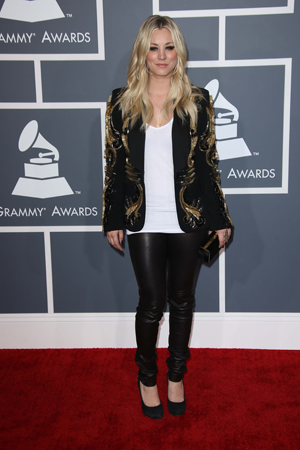 Things are going to be mighty tense for Kaley Cuoco the next time she heads into CBS HQ: The Big Bang Theory actress is working for a company CBS is suing.

The network is dinging Dish over a feature contained in its Hopper service. Auto Hop allows users to skip over ads in previously aired primetime shows (and thus drain the lifeblood out of advertisement-supported network programming).

Wednesday, Cuoco sent a paid tweet for Hopper, which is almost sure to tick CBS off. The sponsored tweet doesn’t bring up the whole Auto Hop thing. Instead, it contained a link to an ad for Hopper with friends watching television on a miniscule phone screen while drinking tiny beers.

In contrast to Those Other Services, Hopper lets users watch on tablets with bigger screens.

“Amazing! Watching live TV anywhere on the #Hopper looks pretty awesome! Now where can I find a tiny beer? #ad” Cuoco tweeted to her more than 1.2 million followers.

Are there wedding bells in The Big Bang Theory‘s future? >>

TheWrap pointed out that the Dish-sponsored tweet conflicted with the CBS game plan; the tweet vanished from Cuoco’s feed thereafter, the site notes.

Surprised that an actress with a real job on one of the only really huge sitcoms left would bother with paid tweets? Don’t be.

“Cuoco is one of many celebrities — and others with lots of followers — who have found that they can make some extra money from the burgeoning field of Twitter endorsements,” TheWrap writes. “She is one of many who tweeted the Dish ad for money.”

Look, celebrities will endorse anything. Tweeting for a TV system, not that shocking.

Cuoco was in a Super Bowl ad for Toyota this year, playing a genie who magics up a RAV4 to grant the wishes of a family.

She’s also in a series of ads for Priceline with William Shatner, playing his daughter.