Billie Joe Armstrong continues to open up about the worst days of his drug and alcohol addiction, including how he got back on track after his dramatic onstage breakdown in 2012. 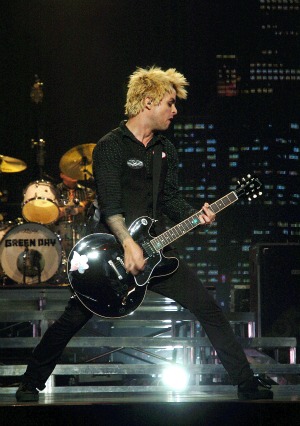 It’s the typical life of a rock star: Drink, drugs and mayhem. But for Green Day’s Billie Joe Armstrong, it nearly destroyed him. The singer told Rolling Stone about the worst days of his addiction, and now he’s sharing what happened after he hit rock bottom.

In September 2012, Armstrong had a breakdown on stage at the iHeartRadio Music Festival, and his manager finally put his foot down and made the star get help.

“I was going through withdrawal. That was gruesome, laying on the bathroom floor and just feeling like… I didn’t realize how much that stuff affected me,” Armstrong told Rolling Stone, admitting he had been trying to get sober since 1997. “And it’s not the stuff that is immediately in your system. It goes back to how long you’ve been using. It was working its way out.”

“I was going through so much s***. Even in the second week, I was like, ‘I don’t belong here. I’m not convinced.’ The sick part of it is I wanted to get all of the narcotics out of my system so I could start drinking. But that’s the insanity of the whole thing. You make excuses. You rationalize. You can take a s*** in a mailbox — that doesn’t mean it’s the right thing to do.”

Armstrong said he finally realized he could lose it all: His marriage, his sons, even his band.

“I think it’s safe to say there were some choices she had to make,” he said. “Am I going to get kicked to the curb? I’m sure the thought crossed her mind — that if I didn’t get sober, I could potentially lose all of that stuff. I could have lost the band, too. I didn’t realize how destructive I was. I thought everybody was in on the joke. But I was the joke.”

With Green Day set to tour again this year, Armstrong said the band will have to sit down and figure out some ground rules to help their leading man stay on the wagon.

“We still have to talk about that,” he said when asked about a “no alcohol rule” for the tour. “Everybody knows it’s coming — what’s going to keep me from falling off the wagon, but everybody is happy at the same time.”

“Sometimes I’m not sure I’m ready,” he admitted about touring again. “There is still the obsession for alcohol. There’s also sleepless nights. But I have to work on it every day. Because I know what goes on out there. I’m hosting this giant party for people. At least 70-75 percent of the people in the audience have been getting a drink on. I’ve got to watch my step.”

Read the complete interview with Armstrong in the new issue of Rolling Stone, available on newsstands now.