It’s a time for new beginnings on Nashville, but not all are happy. 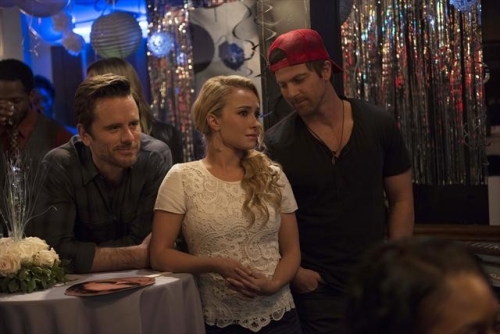 It’s Deacon’s birthday — and all he usually does it stay home and watch Old Yeller — so Juliette (Hayden Panettiere) decides to throw him a huge bash at The Bluebird Cafe.

No matter that her mother is just out of rehab and needs her — it’s party time! She invites all big names in country music and enlists the innocent Scarlett to get him there.

And, surprisingly, he goes and only feigns a little anger when he finds out the real reason for the party. The party is a smash, even though Juliette feels a little threatened when Gunnar and Scarlett perform.

“If I’d known they were that good, I might not have asked them to join the stage with me,” she tells Deacon. It would sound like a joke coming from anyone else. From Juliette? Yeah, she’s jealous.

Let’s get these kids a record deal already!

Rayna (Connie Britton) also makes it to the party, even though the tabloid drama has them on the outs again (more on that in a second). She sings this really haunting song in honor of Deacon — “Stronger Than Me” — and she later tells him she wants “to do right by him.”

What that means at this point is anyone’s guess.

On a side note: We think it’s time to establish the Nashville drinking game. How to play? Drink every time you see a real-life country star make a cameo. Good thing we didn’t start this before, ’cause you’d probably be in the hospital with alcohol poisoning right now: Pam Tillis, Vince Gill, Kip Moore and The Black Keys’ Dan Auerbach all made appearances at Deacon’s birthday party.

And doesn’t Gill totally look like Glenn Beck these days?

Which actress stole Connie Britton’s role of a lifetime? >> 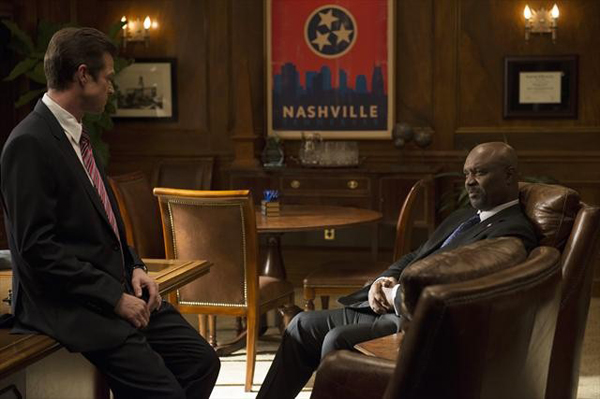 Teddy and Rayna naturally want to keep their divorce on the down low from the press — that’s why they filed in a different county. Too late, though: The tabloids have already picked up on the drama and Rayna and the girls find out about it while the grocery store.

“Just buy all the magazines,” Rayna — in full freakout mode — tells her sister.

Yep, Teddy and Rayna are the tabloid story of the moment and she seems to be getting the blame for all of it, thanks to her connections to both the Dreamy Deacon and Dreamy Liam McGuiness. But, we all know the real story: That Teddy cheated first.

Rayna also tells her estranged husband that Maddie heard all about his relationship with Peggy through a phone call. She, naturally, wants Peggy to stay away from the girls.

So, how is Teddy going to see his ladylove now? By hiring her, that’s how. Smooth, Teddy.

Daddy Warbucks Lamar makes another appearance in this episode to give his condolences to Rayna — and to pull his weight with Teddy. He gives the new mayor a list of “suggested” cabinet members, though it’s pretty apparent the people on the list are expected, not really suggested.

So, what does Teddy do? He finally grows some cojones and stands up to Lamar. And, in a surprise twist, he asks former mayoral opponent Coleman to be his deputy mayor. And he accepts, which is good because Coleman seems to know what he’s doing, while Teddy seems in way over his head.

Everything seems to be going great in the little Gunnar/Scarlett/Gunnar’s convict brother household. Too bad Jason has to go and ruin everything by keeping a loaded gun in their house. Gunnar is furious and meets his brother on a bridge. He confronts him about the gun and Jason basically insinuates that he needs it to stay alive.

Oh, and that Gunnar owes him eight years since he ditched him during that robbery. Because, of course. Gunnar isn’t deterred, though: He throws the gun off the bridge and tells his brother they’re done.

Cut to Deacon’s party: Gunnar is having a great time playing old-timey country songs when some detectives in suits approach him. This can’t be good.

Scarlett notices his absence from the party and is visibly worried. Yes, there are definitely more feelings there than she lets on. So, did the Feds finally catch up with Jason for skipping parole in Texas?

Nope, it’s actually much worse than that: Jason is in the morgue and Gunnar has to identify the body. Awful.

He stays out all night and Scarlett is furious when he finally stumbles in — until she sees the dead look on his face. We find out that Jason was beaten to death by some guys in an alley and Gunnar feels super guilty because he took his brother’s gun away.

So, Scarlett goes to comfort him. Naturally, the comfort turns into kissing and then (we assume) sex, since the last scenes show them pulling off each other’s clothes. We’ve been pulling for this moment, but right after his brother dies? Weird timing.