He canceled his appearance on Jimmy Kimmel Live, but unsurprisingly, Morrissey still isn’t happy with Jimmy Kimmel. Why? 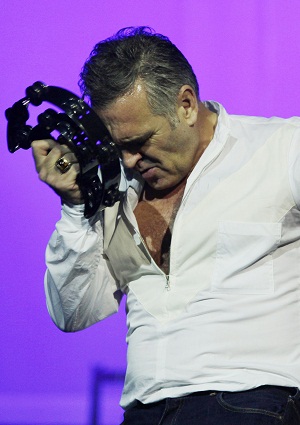 Earlier this week, Morrissey was scheduled to appear on Jimmy Kimmel Live. He canceled the day before he was scheduled to perform. Sure, he’s unreliable, but at least he’s standing up for something? His problem with performing on the show was that Kimmel’s other guests were the stars of the popular hunting show Duck Dynasty.

“As far as my reputation is concerned, I can’t take the risk of being on a show alongside people who, in effect, amount to animal serial killers,” Morrissey said, explaining why he left Kimmel hanging.

Nothing new here: Morrissey gets overly dramatic about meat >>

“While I respect [Morrissey’s] stance on this, I really do, there’s a very good reason why I didn’t dump the Duck Dynasty guys for [him] — and it’s because they have guns,” Kimmel teased.

Later, Kimmel had the Robertson family (from Duck Dynasty) do a skit about hunting for “yuppie food.” The skit included “broccoli traps” and “carrot calls.”

Morrissey gives his opinion (and, once again, no one asked for it) >>

While everyone else thought it was funny (no doubt including plenty of less militant vegetarians), Morrissey got his panties in a twist. Now he’s railing against the show. On Wednesday, he issued the following statement:

“I was disappointed with last night’s Jimmy Kimmel Show wherein our smiling host managed to ridicule depression (70% of Americans have experienced depression according to the National Institute of Mental Health). He then found time to ridicule healthy eating (the obesity epidemic in the U.S. costs $147 billion per year in medical expenditure), and he also ridiculed the notion that animals should be entitled to the possession of their own lives. Furthermore, he found time to jokingly promote gun-ownership — hugely amusing for the parents at Sandy Hook, no doubt. He also promoted his special guests Duck Dynasty — who kill beings for fun. None of the above issues are, of course, as important as Jimmy Kimmel himself, who has finally revealed his show to have an overwhelming loss of meaning. Tune in and relive the intellectual fog of the 1950s.”

After recently canceling shows due to a bleeding ulcer, someone should tell Moz that so much anger really won’t help his health. Then again, can you imagine that finally stopping him?