Joan Rivers – who has managed to stay famous by being mean – is at it again and this time she’s upset a whole audience. Will she ever learn her limits? Here’s a hint: Don’t mess with Adele. 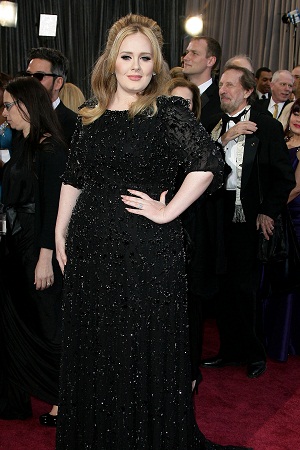 When Joan Rivers stopped by the Late Show to pay a visit to David Letterman, the topic was Oscars, Oscars, Oscars. The star of Fashion Police brought the laughs right up until one joke about Adele landed her in hot water with the audience.

When Letterman mentioned Adele and described her as a “lovely woman,” Rivers made the tasteless gesture of puffing out her cheeks and holding out her hands in a silent but crude way of indicating Adele’s size. Rivers went on to completely ignore the boos from the audience, saying, “What’s her song? ‘Rolling in the Deep?’ She should add fried chicken.”

Crude. (And also not that funny, even if it were placed on a less loved celeb.)

Quick! Someone give Adele a Tony and an Emmy so she can have an EGOT! >>

She also tweeted another jab at Adele about the Oscars. She wrote, “On Sunday night, you could easily pick Adele’s Oscar statuette out of a lineup. It was the only one wearing Spanx.”

Everyone loves to laugh and we can all enjoy a few jabs now and then, but to continually poke fun at one person about the same thing is beyond cruel. It’s called “bullying” and it’s something we’ve tried really hard to teach children not to do. How can you expect kids to take it seriously when someone who is their grandmother’s age is out doing it and making money from it?

We think Adele is confident enough not to let someone else’s immature taunts bring on body issues. But it’s still not nice and extremely unnecessary for those insults to fly in the first place.

For what it’s worth, we think Adele is absolutely gorgeous!