Nicki Minaj sets the record straight about makeup, plastic surgery and who would win an American Idol judge sing-off in a new interview with Extra. 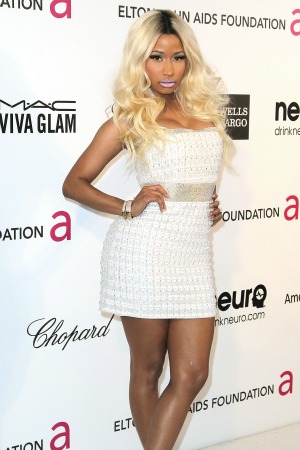 Nicki Minaj is setting the record straight about plastic surgery and altering her face. On Wednesday, the American Idol judge sat down with Extra reporter Renee Bargh to discuss her latest line with MAC makeup and how contouring her face using makeup creates the illusion of rhinoplasty.

Minaj told Bargh, “When people see my makeup, they think all types of crazy things that I’m doing to my skin, but it’s makeup.”

She continued, “Look at RuPaul’s Drag Race and you’ll see how you can make your nose whatever shape you want. I’ve never had surgery on my face — like God, it’s makeup, people.”

After having the best-selling VIVA Glam lipstick of all time the first time around, she joined forces again with MAC. Profits from the sale of VIVA Glam go to charity, so she’s also helping a good cause. The line benefits anyone living with HIV/AIDS.

The super glam diva is also doing a bit of a “makeunder” in 2013. Her new look is “a bit more grown and sexy and like… less is more.”

That also includes her casual days, which the public never sees, but she promised Extra that her off-day look includes “a scarf on my head, T-shirt, UGGs.”

Audiences won’t be seeing that look on American Idol, but she sure seems to be enjoying her time on the reality show. When asked by Bargh who would win a sing-off, Minaj or Mariah Carey, the “Super Bass” singer had a clever response.

She said, “Oh, I wouldn’t sing. I would just stand there and flash my boobs.”